An overdue list, if not what is should be

Ever since I began to read popular music lists seriously, I have always felt that far too much focus is on the guitar vis-à-vis the other major rock instruments of bass, drums and vocals. Lists of best guitar albums are common, but for bass, drums and vocals one almost never sees them and when i listen I find this a gaping hole.

In this absence, Stuart Hamm’s Ten Greatest Bass Albums of All Time is refreshing. He pull no punches with looking at what he considers to be the ten greatest bass albums of all time:
All these albums date from the 1970s, and almost all are related to progressive rock or fusion jazz. It would be good if other genres could be appreciated and the role of the bass understood therein.

Still, Stuart Hamm in his notes compensates a good deal for this stereotyping because he offers such a good account of how he came to appreciate the albums he lists as the best bass guitar albums. He relates all of these to his own experience and history with the material he recommends, a vital step to draw the reader/listener in.
on Friday, October 22, 2010 No comments:

Not your Pancho Villa

The main headline of Time this week has been a list of the most dangerous drug barons in Mexico.

In the public eye Mexico is not associated with drug barons (also called “drug lords” or “high level drug dealers”) in the way the “Andean” nations of Colombia, Ecuador, Peru and Bolivia are. Many would know about the story of such drug barons as Pablo Escobar, who was in 1987 estimated to be the seventh-richest man in the world, but Mexico’s drug barons are not nearly so familiar at least to me.

Coca is certainly grown in Mexico despite requiring a wetter climate than most of that country possesses, but I had assumed the country’s main claim to criminal activity resided in a quite different sphere: political corruption and so-called “people smuggling”.

None of the people are at all famous to me in the way Escobar was, but the “Sinaloa cartel” apparently is as dangerous as the more famous Medellin cartel in terms of its control over world markets for cocaine. There are also the “(Ciudad) Juarez Cartel”, the “Gulf Cartel” and “Tijuana Cartel”.

The descriptions do evoke a situation where drug-related crime is much closer to the centre of drug consumption than remote lowlands of equatorial South America. If this is so, it ought to be easier to do something about cocaine than Ameriricans probably imagine, but the images are really bad in themselves.
on Friday, October 22, 2010 No comments:

As I have repeatedly emphasised, Australia’s sensitive ecology dictates that its population’s energy use efficiency be much higher than Eurasia, the Americas or New Zealand.

In reality, of course, owing to dirt-cheap coal-fired power that is six times cheaper than any energy in Eurasia, the Americas or New Zealand, Australia is (or ought to be) notorious for its poor energy efficiency and high emissions.

I have noted once previously that the iconic koala is now threatened by disease and global warming. However, today, there is more detail as to what is affecting the koala. It is a disease known as chlamydia, which

causes respiratory infections, incontinence, pink eye and a number of other side effects, most notably, infertility.

It is thought that if chlamydia continues to spread across the koala population, it could cause the species to cease breeding in thirty years. By 2040, too, global warming is likely to mean that Australia’s dry schlerophyll forests will be too dry to support any trees, and extremely hot so that if it ever rains substantially fires would be extremely likely.

Thus, we are at war on two fronts. Whilst scientists may have a solution to the problem of chlamydia in the future, they alone can do nothing about a problem towards which Australia is by far the world’s worst offender. The only people who can do anything are those who would inform – in much more detail than I can by trying to harass people I meet – the public of Australia’s apolitical outer suburbs that without an immediate zero emissions target for Australia iconic species like the koala will be gone within their lifetime.

Whether this zero emissions target should be achieved by pressuring Australia’s apolitical masses or foreign governments is the big question, but that we need it there is no doubt.
on Thursday, October 21, 2010 No comments:

Is this the woman I saw at Melbourne University?

Ten years ago, I was obssessed with the theories of Tony Cliff that the USSR was really a capitalist country, which I would later call in conversation with my brother the ESCD for “Empire of State Capitalist Dictatorship”. My brother called Tony Cliff “TSBTOAC”, for Tony Should Be Thrown Off A Cliff. Sometimes he would stutter when saying the five middle words of the name.

Even before I knew who Tony Cliff was, I listened his followers intensely at Melbourne University, and they seemed to offer a very good explanation for the dreadful, pro-freeway transport policies of Australian governments over the past eighty years. These followers, who formed groups called Socialist Alternative and the International Socialist Organisation, argued that a ruling class has a vested interest in maximising profits, and that building a huge number of cars would bring them larger profits than a modest number of more sustainable public transport vehicles. Despite the fact that I have become wary of the cultural character of these radical groups in demographic terms, there is still much to be said in favour of their argument that working class militancy is the key to good environmental policy.

The effective leader of Socialist Alternative was and still is a woman called Sandra Bloodworth. My brother used to say that she was a mother who abandoned her children to join anti-uranium protesters and turned to socialism with Tess Lee Ack, a veteran of early 1970s radicalism. When I tried to meet the insiders of Socialist Alternative, I certainly saw Tess Lee Ack, who seemed rather bland. Later, I met a woman called Sandra, and assumed she was Sandra Bloodworth, but was terribly unimpressed. This Sandra had the appearance of a 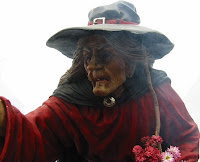 witch and - unsurprisingly when one reads Arthur Brooks - seemed totally uncaring and very rude. She would not even introduce herself to me and seemed to want me to go away even though I was then really interested in socialism.

For a long time, I though I had seen the real Sandra Bloodworth and frequently described her in this way to people I met. My brother, however, always doubted that the socialist whom I admired as a student really did look like a classic “witch”, but I never thought I would be able to check until today, when coming home, one of the very familiar Socialist Alternative posters I found had 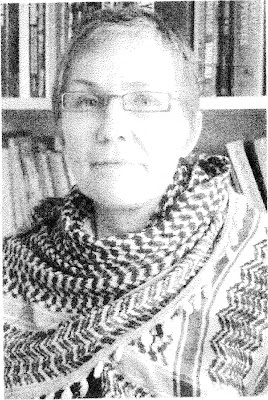 a picture of her. I must say that the real Sandra Bloodworth does not look nearly so much like a witch as I had thought! There is still a possibility Sandra has groomed her hair to make it straighter, but when I saw her face again I really cannot see the wrinkled, witch-like face I recall from that one encounter at Melbourne University!
on Wednesday, October 06, 2010 No comments: