How Australia dwarfs the US

In a recent Care 2 Causes post, they are taking advantage of the fact that those states affected by the disaster are the ones that, among the Enriched World, have the poorest environment records.

What these people do not realise and absolutely must, is that Western Australia has been hit by much greater and longer term climate changes that have ever been known in the Enriched World. Rainfall in its southwest has declined by as much as fifty percent vis-à-vis averages from before enhanced levels of greenhouse gases began to have a dominant influence in 1967. Although the fires that began this summer have not been major headlines and died down from significant rain in January, but the extraordinary spell of hot and dry weather for the three subsequent months suggests very strongly that in fact the region – which possesses probably the most unique biological diversity of any region in the world – already has had its climate altered irretrievably by anthropogenic greenhouse gases. The extremely conservative Australian Department of Climate Change has admitted that it is ninety percent certain that the observed decline of forty percent in southwestern Australian rainfall is due to man-made global warming. They admit that a decline of thirteen percent in wheat yields is likely by 2050. In reality, it is far more likely that under likely carbon dioxide levels then there will be no winter rain at all and that any crop or even pasture production will be totally dependent on erratic and very limited summer falls.

Yet, I recall a good deal of evidence (which a detailed search could not track down) that many politicians in Western Australia are either
Even if there is little outright scepticism, there is far too much ignorance of the radical climate changes that have swept Western Australia in the past forty-five years. What is galling still is that the southwest of WA is one of the most biologically diverse regions of the world and could lose its entire biodiversity at likely greenhouse gas levels by 2050, even if the Enriched World achieves zero emissions. Such a scenario of continuing increases even with major reductions in the Enriched World is, owing to the immense political power of the carbon industries in Australia outlined by Guy Pearse in Quarry Vision. It is exactly the reverse of a sane global greenhouse policy whereby Australia is required to achieve zero emissions and no requirements at all are placed on the mineral-poor Enriched World.

Such a policy, which the political leaders of the Enriched World should have known the necessity of in 1997, would actually have cost lower-class Australians very little, as Pearse says:

“Of course, in the event that carbon pirates did flee, the emissions picture for Australia would improve. If those sectors seeking compensation were put in a backpack and transported offshore tomorrow, Department of Climate Change figures suggest that around 94 per cent of GDP might survive, while Australia’s emissions would drop by more than 40 per cent… In practice, they will not flee. We needn’t wait for emissions trading to confirm this, either. As we’ve seen, companies predicting carbon leakage from Australia already produce the same commodities offshore with renewable energy and vastly lower emissions-intensity. The best-known aluminum producers (Rio Tinto Alcan, Alcoa, Hydro Aluminum and Rusal) all smelt the vast majority of their aluminum with renewable power. As for LNG, industry analysts believe Australian projects will not be rendered uncompetitive if producers are forced to pay for their emissions.

Not surprisingly, ABARE found in 2007 that even if Australia acted alone in cutting greenhouse emissions, for every tonne of greenhouse gas cut only around one-tenth of a tonne would leak offshore – and compensating polluters with free permits made little difference to that.”

Last day with my brother: wonderful meal in an obscure restaurant

Tonight was the last night I would spend for a long time with my brother in Melbourne - for he is off tomorrow to Singapore to work in research with the National University of Singapore.

Although I thought it entirely befitting him that we three should have a special farewell meal in a restaurant, it was not until midday today that I learned he was going to do exactly this. I had to work around this schedule when planning for the meal since I was busy exchanging Mummy’s bag of gold $1 and $2 coins at the bank - and as usual I had slept in very late.

Still, I did manage to be with my mother and departing brother at the appointed time of 18:00 and we went straight to the car and towards the restaurant, which my brother said was in Holmes Road, East Brunswick. Although I knew the area extensively from tram travels, I had no idea what to expect, though my brother said it was a special pizza restaurant with exotic foods like goat’s cheese and pumpkin on pizza that did not exactly appeal to me.

When my brother showed Mummy and me 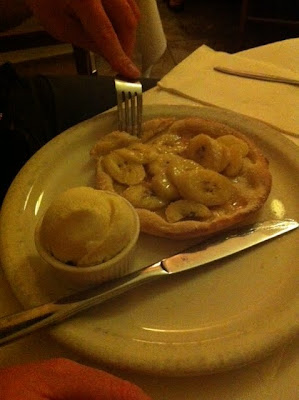 the restaurant, we went in to a mostly empty but well-maintained house that had a charming old feel. I looked at the menu and was not sure what to order, considering a pizza that Mummy warned against because of its hot chili before settling on a salmon one with roe (salmon eggs) that I had never tasted before. Although my brother said it would be tasty, I was very surprised at what I tasted. The flavour of both the salmon and the roe was quite different from anything I had tasted before and extremely distinctive and impressive, and that of Mummy’s pizza with it’s goats‘ cheese equally good. There was also some mouthwatering mandarin-flavoured mineral water that had much more real taste than the drinks i often but for home use or for drinking when I go on longer cycles. I could taste the flavour so intensely that I wanted to drink it in tiny sips so that I would not have it drunk up before the main meal came. (Despite my efforts, I did meet with that fate as usual).

To finish off one of the best meals I have had was a banana “pizza” (more like a pie in reality) with some quite impressive vanilla ice cream. Although - with much later regret as well as dislike form my mother - I consistently buy commercial type ice creams, I have known for a long time that top quality ice creams which we still occasionally have for dessert are totally different from parlour ones.
on Tuesday, April 05, 2011 No comments: