Today, on the last day of a great holiday in Tasmania – an island unrivalled for its comfortable climate and beautiful scenery – my brother has seen this sign on the banks of the Tamar River: 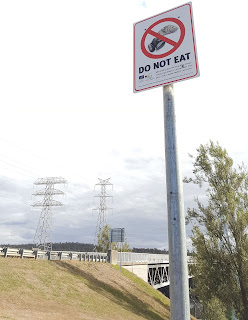 My brother says this would be Thèrése Neumann’s favorite sign because she (believed along with her parish priests that she) ate nothing but the Holy Eucharist for the last four decades of her life. Whilst I find the story endlessly titillating, it annoys my family to an extreme extent.

However, it is a ridiculous joke to say this sign would be Thèrése Neumann’s favorite! For one thing, she was not aiming that others not eat, although her inedia was an extremely special grace accoridng to her advocates. Much more importantly, the sing does not forbid eating per se, but just the Tamar’s shellfish because of potential contaminants!
on Thursday, February 01, 2018 1 comment: