If closing one rail line causes unspeakable congestion, what would a complete freeway ban achieve? 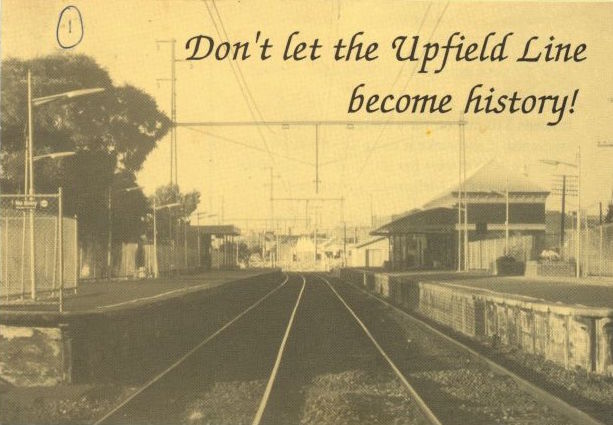 Today, as I was going through RailPage archives in my email, I discovered just how close the Upfield rail line was to complete closure to be replaced by CityLink – the most obscene waste of public money in Australia’s history and one which shows just why a constitutional ban on new trunk roads is so desperately overdue.

Although I have not been that opposed to the light rail replacement for the Upfield Line proposed in the 1980s, excessive wastage upon roads (e.g. the South-Eastern Mulgrave link) even then prevented it being carried out. More than that, the freeways attracted so many off-peak rail users that they actually increased traffic congestion, especially with Australia’s very low fuel taxes.

In the RaiPage article, former transport minister Alan Brown says that the Liberal Government had planned to demolish the Upfield Line and put the destructive CityLink through Macaulay and Flemington Bridge stations. However, a delay in this plan meant that CityLink was revised and was placed above Macaulay and Flemington Bridge stations, and the Upfield Line was saved.

Twenty years later, in 2014, the importance if this very minor decision vis-à-vis the radical (and in Australia essential) planning changes advocated by Environment, Capitalism and Socialism four years beforehand had not been carried out was seen when a power failure on the Broadmeadows Line (since extended to Cragieburn) forced chaos on the Upfield Line as can be seen below at North Melbourne station. 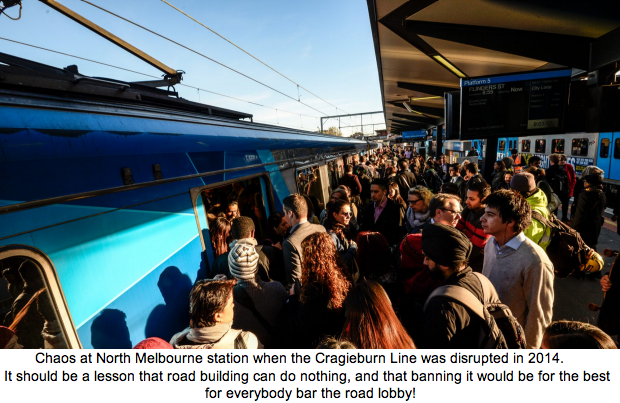 Even Alan Brown admitted in his recent interview that:

“it was the poor relation of Melbourne’s rail network”

“a line that serviced electorates that the Labor Party held and would clearly continue to hold, but it was the right decision for Melbourne”

The question to be asked sincerely is what would happen if the road lobby could have been completely removed from the political influence it has had for the past six decades, so that road building could be officially and legally ended (apart perhaps from minor back streets) and all funds presently set aside for road building transferred entirely to railway improvements and to demolition of demonstrably unsustainable freeways (which means, certainly in Australia, every single freeway ever built). If Alan Brown is right, a rigid policy of ending and constitutionally banning wastage on unsustainable freeways and transferring all money set aside to rail transit could do much more to deal with traffic congestion than all the freeways ever built to feed the RACV, the Federal Chamber of Automotive Industries, the mining companies, and such lobby groups as the Motor Trades Association. Possibly a complete ban on freeways could actually end traffic congestion if the money were used to fund railways and tramways to new developments or on major long-distance routes like from Geelong or Sydney to Melbourne – at least if the nineteenth-century alignments insufficient investment has left in place were updated to allow for higher speeds. People overlook how Australia’s flat terrain – were investment on roads eliminated rather than dictating policy – is ideally suited to high-speed rail, which has instead been created on much less suitable terrain in Europe and Japan due to the absence of powerful road lobbies.

Brown‘s speech – modest as it is – and the lesson that mass protest can prevent such a catastrophe as closing the Upfield Line would have produced, constitutes a clear demonstration of why the most radical change to transport policies in Australia, involving an outright ban on new freeways and highways and a transfer of all allocated funds to rail transit, is over half a century overdue.
on Sunday, September 25, 2016 No comments:

As regular readers will know, my mother and brother love to satirise Olivier Messiaen’s amazing piano works like Catalog d‘Oiseaux, Visions de l‘Amen and Vingt Regards sur l‘Enfant Jésus. The amazing skill playing real Messiaen takes is entirely disregarded, and their inability to understand the extremely complex rhythms and melodies of the music means they resort to crude criticism of calling it equivalent to “a cat playing the piano”, although it is true that several others listeners have said exactly the same thing about Messiaen.

Recently, however, my brother has gone even further with his Messiaen satirisation, saying that a dog playing the piano is the best new Messiaen recording!
In fact, although dogs are more intelligent than cats, there is no way they could play something so difficult even for a highly trained pianist as Catalog d‘Oiseaux with any sort of training. Nor could that dog know what “Messiaen” actually means! More than that, if a cat’s playing the piano sounds – when listened to carefully – in no way like a real performance of any Messiaen piano piece, and is much more clearly different from such even than a cat playing the piano. (Of course, I must emphatically emphasise that a cat playing the piano has no sonic resemblance whatsoever to actual Messiaen piano works).

When my brother said it was a new Messiaen work, I laughed loud. The best wish for all who cannot understand Messiaen is not to satirise but to try, even if they (as my mother and brother do) detest the objectives of the cultural milieu of which Messiaen’s work is part (partly because I talk about a much more gory and unsavory part thereof).
on Saturday, September 10, 2016 1 comment: