Although the weather in Melbourne for the foreseeable future will stand as very warm and sunny, all over the state‘s television channels is news that

torrential rain has caused rivers in the north and west of the state to reach record levels. At Charlton the Avoca River is supposed to have reached its highest level in over 100 years of gauging as a result of the heavy rainfall on

saturated ground. Because of the global-warming-induced dry period since 1997 (2010 is a story I can explain without remotely discarding the influence of man-made global warming but will not here) people in Victoria clearly are not aware of major flooding on the state’s rivers. On the news tonight it was stated by witnesses at the Maribyrnong River in the western suburbs of Melbourne that they had not seen bigger flooding since the 1970s.

I have read about the floods in May 1974 that were certainly much bigger than the current ones but will look at a number of floods earlier than 1974 to:

The year of 1909 was a year of only about average rainfall (relative to 1885 to 1967 average of about 440mm) over the whole of Australia and indeed only modestly above average rainfall over Victoria for the year as a whole.

In spite of this, the rainfall over all of Victoria except East Gippsland was

very heavy during the autumn and winter, with the partial exception of July. August was indeed the wettest over Australia as a whole since 1891. It was this persistent rain and lack of sunshine that caused the ground over western Victoria to saturate by June and even a fairly dry July could not dry the ground because it was so cold: Adelaide’s mean maximum of 13.5˚C was the coolest on record for any month there. As a result, the ground was saturated when August opened - then the weather became horrible for the first three weeks of that month: rain fell almost every day and on the eighteenth it became unusually heavy, with many daily falls of over 40mm in the Western District, Wimmera and Northern Country. On completely saturated ground, that rain simply ran off onto extremely flat land, with the result that western Victoria became a vast lake. Donald, now the focus of rescue efforts in Charlton, was completely inundated and many sheep in the Western District died from foot-rot.

Flooding in August 1909 was certainly more severe than this year in the Barwon basin and the West Coast, where Warrnambool was under water and two people died from drowning. Stock and crop losses, considering the much lower total 1909 rainfall, were also severe.

Averaged over Australia, 1923 was even drier than 1909, but if we take only the winter rainfall zones of southern Australia, the West Gascoyne and Fortescue, 1923 was one of the most consistently wet years known. In Adelaide, for example, 1923 was the third wettest year since 1885.

However, the first four months of 1923 were some of the most rainless known in Victoria: April was the driest month on record in Victoria and followed the driest March. However, when the blocking anticyclone that caused the rainless weather moved away, rain fell ceaselessly for the next three months.

June was the wettest on record over Australia by twenty percent and saw flooding all over the West Australian “Wheatbelt” (when it was climatically that). With no opportunity for drying off as the rain continued and continued, at the end of July the Avoca river rose to a flood level at the time seen only in 1909 and the pre-1973 record wet year of 1870 when Bendigo received nearly a metre of rain. That three-month period saw rainfalls over the Mallee and Northern Country that in relative terms are more astounding than the occasional heavy summer falls over the region: at Swan Hill June rainfall was five times the average. Thus, in spite of the ground being as bone-dry as for most of the post-anthropogenic-global-warming period before May’s rainfall, there was

as much soil moisture by the end of July as would have been the case in a much wetter year. This was especially true when rain from the last of a dozen big lows in June and July exceeded all previous falls during the period.

The consequences for Western Victoria were seen via a major rail accident on the night of August 1/2. A train carrying both passengers and first class mail from Melbourne to Adelaide was travelling at a speed of 65 kilometres per hour, when ten mail vans carrying three thousand bags of mail from England, followed by a first class compartment and two sleeping cars, were derailed at a crossing of the swollen Wimmera River just out of Glenorchy and adjacent to Old Glenorchy Road. These derailed vehicles fell into the waterlogged ground, leaving only the second-class carriage and the guard’s van on the washed-away line. It took a long time before the sleeping cars and mail carriage were removed because of the boggy conditions.

This accident, in part owing to changed development, was certainly worse than any seen in 1909. However, the northwestern floods were not as high, and August was a cool, dry month that eased the problem. September, however, saw record floods in and around Adelaide owing to two vigorous fronts producing over one hundred millimetres in four days. At the peak, Adelaide resembled a lake more than it did a city.

1941. was somewhat wetter than average over Australia at 477 millimetres (about one twelfth above the 1885 to 1967 mean). In Victoria, though, the rainfall was a fraction below normal - though above normal in the Wimmera, Western Plains and West Central districts.

January 1941 was quite clearly the wettest ever known over Victoria. In the South Wimmera, Upper Northeast and East Central it was the wettest January on record; in the Western Plains, West Central, East Gippsland and North Mallee it was the second wettest on record. Because the rain fell in very heavy thunderstorms (Melbourne had more thunder days than in any other month since records began in 1856), less overall rain was needed to produce flooding. The result was that after the heaviest rainfall around Australia Day, record floods occurred on many tributaries of the Maribyrnong (Saltwater) and Werribee Rivers near Gisborne. Landslides were common in this area and in the Grampians.

Though this flooding was more akin to this year’s floods than those of 1909, 1923 or 1955, they were as a whole not so vast with the exception of a few specific areas, because of the drier soil from

the February to October drought of the previous year, which was in fact drier than the corresponding period of 2007 or 2009 in currently flood-affected areas of Victoria. Overall, in fact, even with the man-made desert of 2006 in southern Australia, 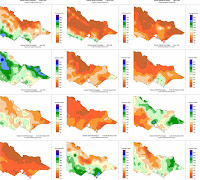 1940 still remains the sixth-driest year over Victoria since 1871, and had that not been an influence the January 1941 rains - amazing as they are - would probably attract much more attention in climatic histories of Australia. They were after all much heavier than some more modern rainfall events that are more widely remembered by Australians.

The record rain of January did not continue for

the rest of the year. Only in March, July and September was Victoria’s rainfall generally above normal for the rest of 1941 as a second successive El Niño took hold. June was however above normal in the Mallee, so the wheatbelt escaped drought, which was moderate and confined to the Northeast. That drought ended with another record wet month in May of 1942.

Unlike the previous three years, 1955 was exceptionally wet over Australia, being the twelfth-wettest year averaged over the continent since 1885, and by area-averaged mean decile probably the seventh-wettest over the same period.

Rainfall became heavy in Victoria at the end of January after Melbourne had had its longest rainless spell on record of forty days from 17 December 1954 to 27 January 1955. Except for April and July, it was above average in every month from February, coming on top of heavy rainfall in November and December of 1954. As a result, at the end of July, western Victoria was already in a distinctly wet state.

However, what happened in August 1955 is something never to be replicated in this age where the Hadley circulation has expanded ten to twelve degrees poleward since 1967. Owing to powerful blocking patterns in the upper atmosphere, the whole of southern Australia was subject to what was described in the August 18 Age as:

“a vast belt of stormy weather stretches from South Africa to just west of the Macquarie Islands.
From almost as far south as Antarctica there is a series of separate storm centres continually moving clockwise”

The result was that throughout August 1955 southern Australia was subject continually to gale-force west- to northwesterly winds and utterly incessant shower activity. Although none of these showers were unusually heavy, they were so consistent that by the ninth of the month flooding set in over the wet Western Victorian catchments and persisted through to the end of the month, with further peaks on the 25th following an increase in the intensity of showers.

Owing to the lack of really heavy short-term rainfalls, the floods on the flat land of western Victoria during southern Australia’s

“big wet” of August 1955 did not break any records. However, the flooding was remarkably persistent and widespread, with most rivers having several peaks during the month - a trend seen on other flooded rivers in southern Australia such as the Torrens in South Australia, the Blackwood in Western Australia and the Tamar in Tasmania. This reflects how it was persistent rather than heavy rainfall that cause the record falls of

In contrast, this summer and in most other major flood periods all flooded rivers in western Victoria have had a single major flood peak. The flooding, combined with very mild overnight temperatures, did cause major rust outbreaks in wheat crops during the spring, although there was not nearly such persistent wet weather. Flooding, though extensive further east in September and October, was not nearly so severe in the west of Victoria.
on Saturday, January 15, 2011 No comments:

Today in Time, as a response to the removal of the work “n***” from The Adventures of Huckleberry Finn, there is a list of the Top Ten Most Censored Books.

The full list - I cannot tell whether it’s in order or not but I do not care since nothing in the text implies a definite order - is:
If this list is accurate, it makes Elizabeth Kantor’s claims in The Politically Incorrect Guide to English and American Literature seem on the dubious side even today.

Indeed, more of the books listed are books that my brother says would be likely to be attacked by schools if Kantor and the PIGs had their way. My brother thinks that authors like Toni Morrison and Angelou whom the PIGs dislike would be banned from education if PIG-sympathetic people came to power in the US. I actually doubt that this would happen, even though experience suggests that the societies the PIGs do admire were by no means free of censorship.
on Tuesday, January 11, 2011 No comments: