Over the past three years, I have done predictions for the 2011/2012, 2010/2011 and 2009/2010 ballots for the Rock and Roll Hall of Fame. I will admit I have never been remotely correct with a very few exceptions, but I still enjoy the work, especially as Future Rock Legends have been as slow as I have looking at the issue.

When I first looked at the future of the Rock Hall around the time of the 2005/2006 ballot, I always thought that the 2012/2013 ballot would be something of a turning point because I felt that it would mark the date at which underground political hip hop entered the mainstream consciousness of Blue America with the rise of Public Enemy and N.W.A., who were as central to the Bush Senior Era as bands like the Rolling Stones and Jimi Hendrix were to the 1960s. There was also key grunge artist Soundgarden, whose eligibility has been put forward without results since they did have a recording out on a 1986 compilation.

Some critics, however, doubt that an aging Nominating Committee will actually take advantage of the creativity of the Bush Senior Era and will focus on a few commercially successful artists that at least had critical respectability, along with a backlog that fails to shrink in size as it gets more and more remote into the past.

I am not sure that the Nominating Committee is opposed to rap, even though it has been slower that I would have guessed half a decade ago at inducting those rap artists one would have expected to see on Rock Hall ballots.

I predict that the following eleven artists will be on the 2012/2013 Rock and Roll Hall of Fame ballot:

If the eleven artists listed above do not make the 2012/2013 ballot, then it will probably because some of these make the list:

The Enriched World’s hard heart: can government not help?

Today, whilst I was at my half-sister’s for the first time for months - despite a number of letters dealing with the problems my mother has had with cancer and a masectomy that still troubles me though she was cleared earlier than last year, she and her partner asked me to watch a program about Australians whose families live in refugee-stricken nations of Africa and Asia.

The program was extremely interesting to watch: it showed much more than I had ever previously known about the horrific conditions experienced by Somali refugees in the arid and brutally hot eastern part of Ethiopia. The conditions, in a climate that reaches 45˚C in most of the year and a barely more tolerable 35˚C between December and March, are terrible. There is no shelter, just rooms for people to live in held together by metal poles. When a strong wind blows, I saw terrific dust storms.

The situation in cooler Afghanistan was similar, only the less harsh climate with more water from snowfall and spring rain made it seem much less nasty. Still, the conditions in Afghanistan were very poor, and the men interviewed had no jobs or any chance of obtaining one.

My relatives, who talked whilst I kept quiet, were saying that Australia should be doing much more to help and accommodate the large number of refugees that are in these camps. The refugee camps in the eastern Ethiopian desert, according to the program, are “tent cities” (though the “tents” are flimsy as I noted) of many hundreds of thousands of people, and my relatives argue that instead of trying to move the refugees to places like Christmas Island, Australia should try to accommodate them with their families here.

The trouble with this is that, ecologically, Australia is already known to be seriously overpopulated. The total water runoff of the continent south of the Tropic of Capricorn have a 100-year minimum of around twenty cubic kilometres per year - which with the shift in the rain belts poleward could fall considerably lower. More than that, Australia is the fourth most biologically diverse nation in the world and even with very limited and extensive land use most of its unique biodiversity could be severely threatened quite soon. In contrast, the Enriched World of Europe, temperate Asia, North America, New Zealand and extratropical South America have easily manipulated ecosystems of low fragility and temporal variability. 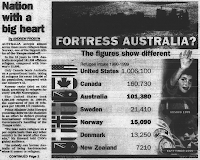 All the more telling is how the more developed Enriched World nations of Europe, North America and New Zealand, even with their superior social services, cannot compete with Australia in attracting refugees, despite the fact that their governments complain intensely about Australia’s poor treatment of refugees and argue for it taking more.

What this ignores is that social services cannot substitute for a privately hospitable environment in which people willingly give to each other. Writers like Arthur Brooks, Anthony Gill and Erik Lunsgårde have clearly shown that the more developed parts of the Enriched World are totally lacking in this quality precisely because of the very large sizes of their governments. This large size of government serves to prevent people in the Enriched World from wanting to help each other: instead they want to take from the government or from the rich. No matter how good a welfare system such a government brings, the way it drains the non-existent natural resources of Europe, North America and New Zealand is devastating for the very thing these low-fragility nations should recognise their need to do: help support nations that are poor or have ecological problems from infertile environments.

It is a serious problem that these nations’ governments cannot recognise how their own deeply ingrained high taxation rates make them per se hypocritical to condemn refugees, because their private social structure is totally hostile to them. Taxes in the Enriched World would need to be largely or completely dismantled to provide opportunities for the building of communities that routinely occurs in Australia and which occurred in the Enriched World before the working classes pushed through welfare states. This is not likely when protests show how clearly Enriched World working classes have lost no militancy, but it is the only way to avoid a mass hypocrisy on two very distant but related issues.
on Wednesday, August 29, 2012 No comments:

Today, “hip” music webzine Pitchfork is releasing a list of the “best albums of the past 15 years”, as voted by “the people”. To be consistent with other lists I will only list their Top 100:
The thing about this list is that so little of it represents the music ordinary people have been listening to in the past fifteen years. Although I have followed less and less commercial music since the late 1990s when albums qualifying for this list begin, what most people have been listening to during this period is quite different.

Radiohead have been described by “janitor-x” as “a one-hit wonder for mainstream rock radio and a corporate rock band for the underground”. This does give you some idea of what line Radiohead have walked (with a lot of success, of course) over the period under review. The same is true of the Strokes, whose music is nothing more than bland “alternative” rock. Arcade Fire and the fleet Foxes, whose music I once lsitened to in a store, are the same: they hark back to the past without offering anything new.

The “freak folk” movement that made the most interesting music of the period since the grunge revolution of the Bush Senior Era is modestly covered, whilst such movements as metalcore (e.g. Converge) that people like “janitor-x” said represented the genuine underground are quite naturally completely overlooked. Although I have had little look in my extensive study of music at the instrumental-type underground that arose from the fertile “post-rock” movement of the late 1990s, that still does not prevent me from overlooking it, even though unlike metal and ahrdcore it has little popularity among the working masses in America.

Then, of course, it is possible to argue that there could be a failure in the list to represent movements that were genuinely popular, from teen pop to “nu”-metal. Whilst it is unlikely anything would be of value among such movements, there could still be more efforts to reach a different audience.

All in all, Pitchfork cannot be said to have created a “people’s” list, rather they have created an “academic’s” list that may not even reflect where music is going today.
on Saturday, August 25, 2012 No comments:

A reversal on the rhino poaching debacle? 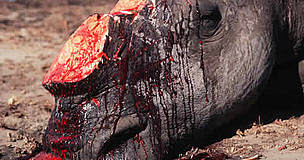 In the early months of this year, as I have documented in a number of posts, it has been shown that the Vietnamese government has played a major role in the recent rhinoceros poaching epidemic in southern Africa that is severely threatening these species.

Now, however, after relatively minor attempts to apprehend poachers in South Africa, which holds the vast majority of surviving rhinoceroses, is news that the governments of South Africa and a seemingly reformed Vietnam are going to sign a deal to stop the poaching of rhinoceroses for their horn.

One hopes that the formerly Stalinist government of Vietnam really is sincere about doing something to stop poaching of endangered rhinoceroses. The trouble is that so many governments have the problem of people like rhinoceros poachers donating money in such a manner that one is hard pressed to tell whether it is legal or not. More than that, the Herald Sun suggests that only mass political pressure has caused the South African government to do anything about the Vietnamese government’s purchase of rhinoceros products. If public pressure eases, then it is easy to see how rhinoceroses could be killed in even greater numbers than is occurring at present, even with treaties between the two nations’ governments firmly in place.
on Wednesday, August 22, 2012 No comments: