Who is responsible for oceanic pollution

The end of this financial year has seen all the major chain supermarkets phase out single-use plastic bags, in an effort to deal with the problem their ingestion poses to extremely long-lived marine mammals and birds like whales and albatrosses.

In reality, I have taken the change with a grain of salt – in our home, plastic bags invariably have a life cycle of being used as shopping bags and ending either when they rupture. Rupture ultimately happens even to the less fragile cloth bags we use for major shopping trips to Barkly Square, but it can happen extremely easily to bags not designed for heavy items like milk, as I discovered a week ago when shopping for coffee in Balaclava. All that had changed it that we have to pay fifteen cents for a bag every time we shop, or take a used plastic bag for small shaping trips.

This morning, however, I have read a list compiled from the article ‘Plastic Waste Inputs from Land into Ocean’ that had been published in the journal Science three years ago. Although it is undeniable Australia is the planet’s worst offender regarding greenhouse gas emissions, at least when one factors in per capita and indirect emissions, it does not rank amongst the top twenty nations in ocean pollution despite its large coastal area: 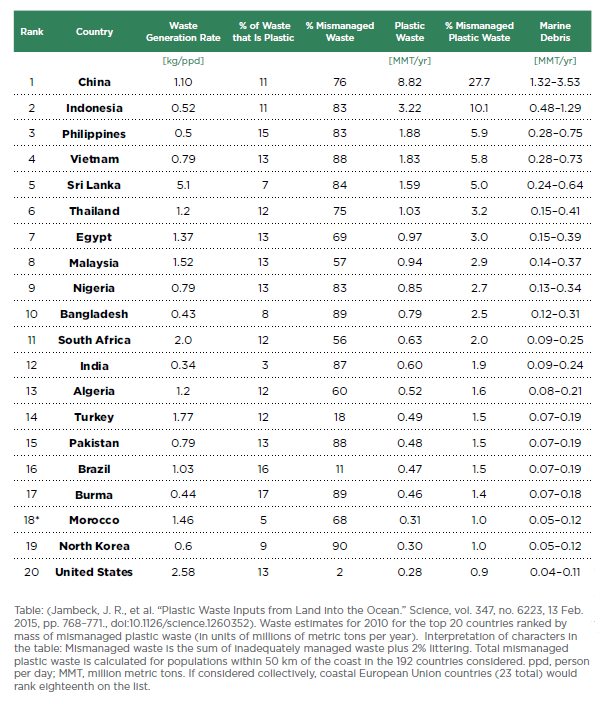 As we can see, Australia does not rank amongst the top twenty nations in terms of plastic waste emissions into the ocean. Almost all the actual top twenty are Tropical World nations where waste is mismanaged. Only South Africa is a comparable Unenriched World nation, and even it does not mismanage so large a proportion of its waste. However, alongside its high total greenhouse gas emissions (higher than any single EU nation), South Africa’s figure for a nation which borders on large areas of cold nutrient-rich sea containing many endangered marine mammals and birds suggests it bears considerable responsibility for whale, albatross and penguin declines.

It is untenable that South Africa and the mineral-rich Middle Eastern states were missing from the Kyōtō Protocol in 1996 – their per capita emissions and even total emissions were and are much higher than many EU nations who were part of that botched treaty. Their absence is already affecting the Earth’s climate, by spreading the Hadley cell at such a rate that – according to the Sydney Morning Herald’s ‘“Time bomb”: Tropics expansion nudges cyclone formation into new areas’ – in 2090 Perth is likely to possess the climate Onslow did before the expansion began five decades ago. Matt Walsh and J.R. Jambeck show that the globe’s ignorance of and inability to rein in the pollution produced by these powerful states – which began not with Kyōtō but with apartheid in the 1950s and the energy crisis of the 1970s – is costing all of us.
on Saturday, July 28, 2018 No comments:

Missing the reality of climate change

This January, Care2Causes published a list of the ‘8 Top Species Threatened by Climate Change’ which it reprinted a few days ago.

The list comprised:
Whilst this list does include many species threatened by Australian road building and land clearing, it has much too little focus on the Mediterranean-climate biomes of the Cape, Southwestern Australia and Central Chile that are the true locus of runaway climate change today. The three species of tingle (uniquely buttressed eucalypts), along with the Noisy Scrub-bird and Western Bristlebird (two species on whose protection large amounts of money have been spent) are at extreme risk from shifts of winter storm tracks in the Southern Hemisphere. So too are the unique fynbos and renosterveld of the Cape region, and many species of Mediterranean Chile that cannot easily move through relatively dense populations to escape to more nearly analogous climates to the south.

One problem that these regions – especially southern Australia and central Chile – face is that the lack the iconic large species found in Africa and most of the northern hemisphere. The giant karri and tingle forests – whilst a noted attraction – are simply much too localised to be of significant use in protecting what must rank as the globe’s most urgent conservation priority and the region with the worst environmental policies anywhere in the globe. The lack of megafauna means there exists no incentive to preserve the most ancient species on the planet, and thus land clearing and road building in southern Australia are free to devastate the atmosphere until some country abroad says “enough” – which seems only a faint possibility even today.
on Sunday, July 08, 2018 No comments: