Most hilarious joke I’ve ever seen

A few days ago, trying to find any footage of rugby games from twenty years ago when my brother used to say the object of the game was biting ears, I found the most hilarious typo/joke combination I have ever seen:
Although I am sure that “reverse grade” was a typo, the reply is just so funny!! In actual fact Vautin spent the vast bulk of his time with the Roosters in first grade, playing at most six games in reserve grade at the tail end of the 1990 season. The way it could be believed that even strongly-built and fast rugby players could run around backwards is ludicrous, as is that they would do that when the object of rugby is to move the ball forwards!
on Tuesday, April 23, 2013 2 comments:

Although she has been concerned about the possibility that our back wall would for over a decade - at one point we worked intensely to remove a Chilean willow and ivy vine to stabilise it - it is only very recently that my mother has acted decisively about the crumbling structures of our home of fifteen years. The recent order of the Melbourne City council that all potentially unstable walls within the local government area be demolished has caused her limited finances great difficulties because the combined cost of demolishing and rebuilding the back and side walls could be a large fraction of my mother’s yearly salary - at a time where I am doing as little as ever to find some work that could ease the home’s dependence on her salary at Penleigh.

A week and a bit ago, my mother thought that the wall would be demolished and rebuilt by Tuesday 16 April, but the dangers of a standard demolition delayed the job of the demolition of the back wall until the last minute. I watched the demolition and - without showing it to the builders or even to my mother when I spoke to her that night - did feel concerned about the western wall between our courtyard and the living room next door.

Still, it is a shock to see that the western wall may need demolishing, and that we may have to move into a new house. With my brother working overseas, Mummy even thought of moving to the gorgeous climate of Tasmania with its 21˚C summers because of the lower cost of housing (and energy with less need for air conditioning) compared to suburban Melbourne! I have often thought that even if we did have to move to have the western wall demolished we could save money by moving into a relative’s home, but Mummy dismissed the possibility and said that there would be enough housing to rent.

Having not moved for a long time and acquired so much material - though I do try to be discriminating nowadays and do have a feeling I am more efficient with money than for a long time - it would not be easy to move. Yet, the side wall and even the front glass-brick wall may soon need replacement as the cement in it is just as loose, and especially in the summer it would be too uncomfortable to stay.
on Sunday, April 21, 2013 No comments:

Class war in the Enriched World: alive and well in 2013 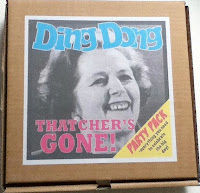 Yesterday when visiting my half-sister, I watched on a brief spurt of ABC news (after the first half of the 1996 Semi-Final between Brisbane and Carlton) a number of contrasting reactions to the death of Margaret Thatcher, from entirely typical praises from politicians to unions who had suffered at her hands condemning everything she stood for. Some of these unions partied, to the point of handing out “death cake” and calling Thatcher a “bitch” or “witch”.

Popular opinion seems to hold that the days of class war in the Enriched World are largely over – and conservative opinion from people like the Mises Institute tend to think that the working masses were never the people who drove the growth of what they call “socialism” or “big government”. Instead, the radical Austrians believe that big government and the large deficits that in the Enriched World are an inherent cost thereof were produced entirely by academic communities. 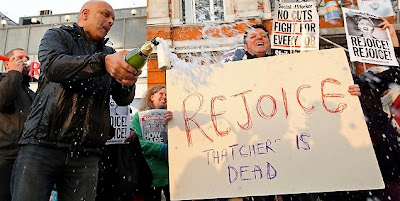 The occurrence of these parties at Thatcher’s death suggests that in fact class war was prominent and remains alive in the Enriched World. The only difference seems to be that the ruling classes are less ecstatic about the conservatives they support. The fact that Thatcher’s supporters can proclaim in a sentimental manner how:

“Parties rejoicing at the death of Margaret Thatcher are a tribute to her, a close friend said – because it shows she won.”

is proof how the ruling classes of Britain really do not know how to counter the problems of government debt and economic decline. They cannot do anything to lower relative prices – the sole route to long-term competitiveness in lands where orogeny and glaciation have wiped out key industrial resources like bauxite, manganese and iron ore – but their knowledge of how finances work means they cannot simply impose the income caps and nationalisation that Enriched World masses still demonstrably want. The Australian here possesses somewhat similar flaws, not recognising that letting the people make decisions meant they would choose to try to take from whom they saw as rich.

In fact, there is no way Thatcher’s plans of limited government have had any influence on the larger culture of the Enriched World. The militantly atheistic nihilism of AC/DC and the Sex Pistols must rank as far more influential among those who grew up in Thatcherite Britain than the ideals of a ruling class in some ways clinging to past glories. So does the radical egalitarianism of libertine academics who established their positions during Thatcher’s reign.

What we need to recognise is that in the Enriched World, class war became a natural consequence of the “industrial reversal” which turned the pre-industrial societies “haves” into the ultimate “have-nots” devoid of substantial mineral resources and no longer having the unique advantage of its young and fertile soils. Pre-industrial Europe, Asia and the Americas may have had very strong class divisions, but their effects were nothing like what they are when a doubly-deprived working class evolves.
on Wednesday, April 10, 2013 No comments:

Target Australia - but only where it will hurt

Although this could have been done as early as the 1974 Lake Eyre floods, it is finally being admitted that Australia’s radically changing climate, with rainfall having declined by 1 percent per year during the rainy season in southwestern Australia since 1968 and increased at the same rate in northwestern and central-western Australia, is almost certainly a totally man-made occurrence.

A Climate Commission, formed very recently in response to the very hot summer in Melbourne and the severe floods on coastal Queensland rivers such as the Burnett are clearly related to anthropogenic global warming. The Age, in its analysis, says:

The report argues that, as the world’s 15th biggest emitter of greenhouse gases, Australia should move towards cutting greenhouse emissions “to nearly zero” over the next forty years.

Calling Australia only “the fifteenth biggest emitter” is misleading for the following reasons:
Under this scenario, governments of the Enriched World who need to transfer resources from their own greenhouse gas emissions to serious sanctions against Australia.

In many ways, sanctions against Australia are analogous to those against apartheid South Africa. After all, we are in both cases dealing with a mineral-rich nation on an ancient land surface with politics far to the right of other ethnic European populations. In both cases the Enriched World  depends on these Unenriched lands for essential minerals, and seek unity despite the fact that in the long term neither ruling nor working classes share common interests. If you read Southern Cross University’s ‘Current issues in environmental management in Australia: what do people think?’, you will see that the majority of Australians believe the climate is changing but do not believe their own greenhouse-intensive lifestyles in a naturally exceedingly low-energy land to be the cause, despite a great deal of scientific evidence.

What we can recognise is that sanctions against Australia must be specific – aimed at demolishing the structures that cause severe environmental degradation, most especially farming on a large scale of soils (unlike almost all Enriched World soils) never naturally designed for that purpose. They must not be as indiscriminate as against apartheid South Africa since such sanctions can serve to isolate a community in an unhelpful manner – besides isolating the world from places of greater importance in many ways than even the population and economic centres of the Enriched World.
on Monday, April 08, 2013 No comments:

A recent - lucky - find that I have come to treasure is Canadian singer Veda Hille’s Path of a Body, released in 1993 and long out-of-print, but a superb record with amazing contrast and flowing textures that range from hard rock without any pomposity to complex progressive songs like “Rhapsody” and “With No Caring” (for more, see later). Path of a Body is or seems to be a loose concept album about a mother’s pains having a child: Hille was to become much more tightly conceptual - though not more effective - on her later albums, including one produced by XTC’s Andy Partridge.

Perhaps even more unusual than the record itself, though, is the cover, which features on one side the title and - and this is the key - a phonetic representation of “ve|'də hi'lee” “pæθ əv ə ba'di” on the other: 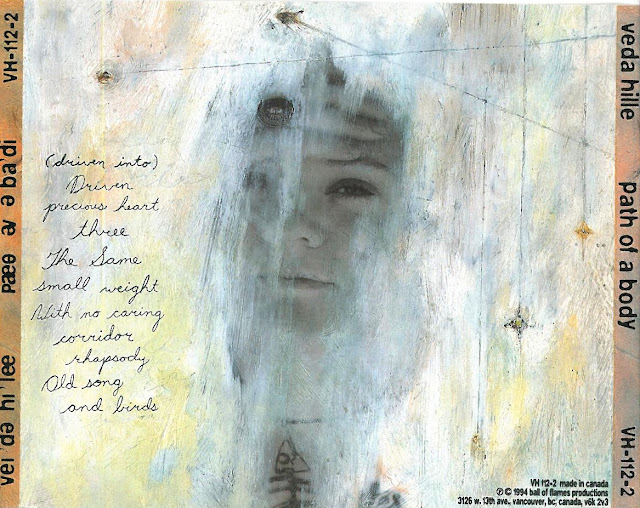 (I had to try this several times because the file was a .tiff file which blogs generally cannot upload). On the original image I misread “caring” and “carving” so that in my initial review for Rate Your Music I wrote about a song “With No Carving” that does not fit the theme of the album! it is probably the first time on iTunes or RYM I have ever done that, and I have written about music for a long time now! I wonder if any of you see how I made the mistake, or if you have seen a cover quite like this one ever before in your life??
on Thursday, April 04, 2013 No comments: