Comparing temperature and rainfall data – with an example

In my previous post, I noted that rainfall extremes and changes are a much more reliable guide than temperature extremes and changes to global warming – because the latter can be distorted from circulation changes produced by the enhanced greenhouse effect:
The main theme of my previous posts was to show how inverse relationships exist between temperatures for most places at the same latitude. Unlike with rainfall where it is possible for models to show which regions will become drier and which wetter with enhanced greenhouse gases, temperature changes do not show any “preference” so cases of temperature change locally cannot easily detect global warming. The following diagram comparing mean daily temperatures in January for the contiguous US and Alaska North Slope is illustrative: 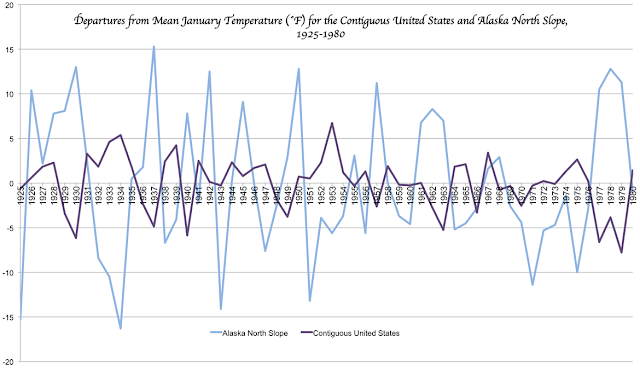 If you look carefully, you will see that the large anomalies in the Alaska North Slope co-occur with large anomalies of opposite sign averaged over the contiguous US:
In contrast, we can see this graph of rainfall over major cities in southwestern Australia and Central Chile. In the previous case we would except co-occurring warmth but never observe it, but here we see synchronous drying, especially in the southern part of Chile between Curico and Valdivia:

The decline here is obvious, although the wet years observed in the “virgin period” are not coherent, the dry years from global warming are much more critically so.
on Tuesday, May 19, 2015 No comments:

Correlations between winter maximum temperatures in the Northern Hemisphere – and lessons

In recent weeks as I have read the North American Monthly Weather Review, it has often occurred to me that harsh winters in certain parts of the Northern Hemisphere correlate with mild winters in another part – although I have not noticed a consistent basis by which this occurs.

Analysing Monthly Weather Review issues from the 1970s when hysteria occurred over another ice age after three extreme winters in the eastern United States, I noticed how often higher-than-average temperatures in Alaska seemed to occur alongside extreme cold in the contiguous US (e.g. Januaries 1937, 1963, 1977, 1979). Owing to the cold temperatures and extremely low population densities of Alaska and the Canadian Arctic, little attention was paid to this by Americans faced with extreme cold and shortages of heating oil in January 1977.

Today, I did a table of January temperatures over the contiguous US (apart from the southern States westward to New Mexico) by NWS region and for three representative districts of Alaska, and then did both Spearman rank correlation and Pearson product-moment correlations for them.

To minimise the effect of man-made global warming, I limited my data to the period from 1925 (when Alaska climate data begin) to 1980. As you can see, the January temperatures between 1925 and 1980 show a definite negative correlation for all but adjacent districts. Only four Januaries (1928, 1931, 1944 and 1967) were warmer than median across all six divisions, and only 1966 and 1969 were colder than median across all six. In fact, only January 1967 comes close to having been warmer-than-normal across all five NWS regions (the four contiguous including the Southern, plus Alaska as an NWS region, where it was marginally below normal).
These generally negative correlations are noteworthy because it shows that one cannot simply rely on a cold winter in one region of residence as proof the climate is changing: a global warming implies warming in all regions.

These results constitute a critical contrast with precipitation changes: precipitation changes in a single region are much easier to compare with expected observed changes in circulation from warming of the troposphere – especially the poleward spread of the subtropical arid belts along the west coasts of Australia and South America, as noted by Dian Seidel in ‘Widening of the Tropical Belt in a Changing Climate’ back in 2007 (since when these trends have intensified) – and can also be correlated with inverse precipitation trends in other regions (e.g. eastern WA affected by increased flow of tropical air from monsoons and cyclones) to much more consistent effect.
on Sunday, May 17, 2015 No comments: