A panic we do not need

In this article, there is what I would call a rather unnecessary panic over Canada's failure to remain within the Durban Protocol - whose best thing is being located in one of the most fragile of ecosystems that can have something far, far more useful and telling about the issue of global warming. People are suggesting that Canada, one of the worst per capita emitters in the world, is a key issue in the context of global warming and that Peter Kent, a prominent minster in Canada’s Harper government, does not want to extend the 1997 Kyoto targets.

As I have said many times, the 1997 Kyōtō targets reflect no ecological knowledge that Tim Flannery and Tom McMahon showed even before they were signed, and the result is that on a global perspective free markets tend to encourage conservation in the very regions with least need – the very low-diversity, heavily glaciated polar, montane and boreal regions where growing seasons are too short and terrain too steep for economic farming, even though these regions have the advantage of reliable rainfall and that their soils are continuously forming today when those of Australia and most of sub-Saharan Africa have not been forming for 300,000,000 years. For this reason, how nations could panic at Canada's withdrawal when they have done nothing about the constantly rising emissions from Australia is quite ludicrous. If they should panic at Canada, they ought to be invading Australia until the final car and last coal-fired power station within the continent is demolished, regardless of the immense bloodshed that would result.

Reduction in or elimination of government welfare services, industrial regular, farm and fishing subsidies and even environmental regulations in Canada may have the effect of actually reducing per capita and possibly total greenhouse gas emissions since with cheaper housing and more business opportunities families that are at present unaffordable may become more nearly so than anywhere in the Enriched World (though never so much as in land-rich Australia and Africa).

The realisation that Canada, despite its very poor per capita greenhouse emissions, is of peripheral importance, especially with its likely future population decline from a very low fertility rate of under 1.5 children per woman (about 80 percent that of Australia) would be a huge step forward. The only thing I can say about the present reaction is that Canada’s presence, by virtue of its geographical nearness and ecological similarity, is felt much more than the more critical presence of Australia.
on Thursday, December 15, 2011 No comments:

Sports market overload and the need for care in proposing relocations

In this article, renowned sports writer David Berri looks at the problem teams in unviable markets have for both the cities that must support them and the leagues in which they work.

His particular focus in on the National Basketball Association, which in recent weeks has been stalled by a recently-resolved dispute between owners and players over revenue, and where one might relocate those teams whose present cities cannot afford to support them. Berri makes a look at those markets without a present NBA team which his data show as able to support one based on the average cost of an NBA team. He compares it with the requirements for the NFL and NHL (slightly higher), Major League Soccer (much lower) and Major League Baseball (extremely expensive presumably due to the epic season length). Whilst given the tiny talent pool of the NBA it is hard to see how an NFL franchise would not be cheaper even with the much larger roster size, it is still a valuable look at the costs involved.

Berri and Arturo Galletti look at:
The analysis is very revealing and sensible in most areas. The notion that more than one city could support a team is very sensible and more generally applicable than just the Green Bay Packers. The income data are very useful because I have never seen so concise a table with so much data on US city incomes.

There are problems, though. The first is that of relative income or cost of living. It remains revealing to realise that the poorest region of North America is in reality the heavily glaciated, mineral- and land-poor, and snowy New England region, due to the costs of living in a chilly climate. What that does suggest is that cities in that region really have much less money for sports teams than those in hotter regions with same or even lower income. By the same token, cities in the low-cost Sunbelt would on this basis be more able to support teams.

A second factor is that marianismo in outer suburban and exurban Sunbelt areas, as I noted earlier with Australian suburbs, tends to produce a noncombative, noncompatitive culture which tends to be very hostile to competitive professional sport on the grounds of its ethical influence which tends to value extreme hardness and aggression. This factor makes markets like Atlanta and New Orleans very poor despite their abundant population and low living costs, and probably makes other Deep South cities like Birmingham and Baton Rouge totally unviable markets since only the income of a small proportion of the city’s population might support sports teams.

The third is that interest in the various North American professional sports is not evenly distributed. Ice hockey, obviously, is of interest only in the colder regions of the country and has caused problems moving to hotter regions. Gridiron is likely to be of little interest in Hispanic regions where soccer is more popular, but of great interest where Polynesian Americans are concentrated. This factor would rule out many (if not most) possible relocation destinations that would look financially feasible. 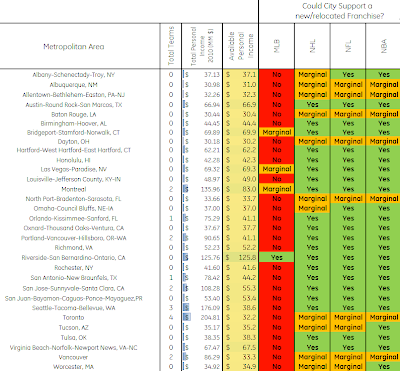 In this table, I have isolated all the cities that could potentially support a relocated NBA, NHL or NFL team, since there are such teams as:
that really have little choice but relocation for their survival. Two of these teams have been “re-possessed” by their league for an indefinite duration as the Sydney Swans were in the middle 1990s after three successive wooden spoons, whilst many of the others, like the Timberwolves, have never been profitable since formation.

The logical choice of the “Inland Empire” of southern California makes sense, but there is the huge problem that government regulations make it difficult for a private entrepreneur to build a stadium to attract an NBA team or even MLB’s struggling Pittsburgh Pirates.

Connecticut may seem easy but is terribly tough due to its high living costs which could easily cut the income in half, along with its cold winters that are certainly a factor in the problems of the Bucks and Timberwolves. Even with the NHL where its cold climate is an asset teams have not been successful in nearby Rhode Island, though a general Connecticut team may do well in ice hockey.

Las Vegas, were the major leagues to lose the fear of its gambling associations, would be a very good choice for relocating a struggling NBA team since it has a large income and a hot climate that because of the paranoid fear of winters that are not warm attracts many people who cannot grasp the ecological costs of living in a hot climate.

There are several choices that were not seriously discussed by Berri or so far by myself, which I will briefly assess:
I think that sums up the potential of all listed cities. I intend to look at how efficiently teams might be organised in a later post.
on Sunday, December 04, 2011 No comments: