As a child, I was obsessed with the history of the VFL (now the AFL) and noticed that Hawthorn, the club I most closely followed during those years (it got so boring after a while because they won so many games and I preferred to focus upon statistics) had gone from the worst club in the League from 1925 to 1953 (when it won only 111 and drew three of 522 games) to the best in the League during the 1970s and 1980s. Between 1969 and 1991 Hawthorn won nine premierships and won overall almost 69 percent of its games.

In the history of the VFL/AFL, no club has shown over sustained periods such striking contrasts in its results. For a long time, I ignored the contrast in Hawthorn’s VFL history as a pure accident, but in recent times as I have become more aware of cultural differences across the developed world, I have come to realise that there is much more to Hawthorn’s uniquely bad record from 1925 to 1953 than  popularly acknowledged by either historians or those within League officialdom itself. In my article “Why to Expect Compassionate Conservatism” and review “Marianismo Versus Masculinisation” I show a major cultural divide separating Australia and “Red” America from the rest of the developed world and indeed from many developing nations. Australia and “Red” America stand out as much more
than the rest of the developed world. I argue that this is due to their different cultural values, which are much more feeling-oriented than the rest of the developed world and their traditions of much smaller government due to less demand for radical social reform during the nineteenth and twentieth centuries. In essence, Australia and Red America have retained lost values of “marianismo” that have completely disappeared as far as they existed from most other developed regions. The reason for this difference is that resources of land and minerals are much more abundant in Australia and Red America, and a lower population density. This results in much less competition for resources, especially in areas that are not industrial. (The north-of-Yarra clubs were originally based in densely settled and/or industrial areas where unions were strong).

The result is that eastern and outer suburbs of Melbourne developed (and retain) a culture that is
Such a culture can be referred to as a culture of marianismo. Although the term is historically restricted to Catholic and Eastern Orthodox cultures that venerate the Virgin Mary, in fact marianismo as defined below can also be found among such Anabaptist groups as the Amish, Hutterites and Old Order Mennonites (where it is known by the German word “Gelassenheit”. Marianismo can also be found to a considerable extent among many Buddhist cultures of the Himalayas.

In a noncompetitive, comfortable culture like that of outer-suburban Melbourne, sporting teams have a very hard time because people tend to be very accepting of defeat and lack a fighting spirit. This “nice guy” attitude fits perfectly with Hawthorn’s amazingly bad early VFL record: its players never minded losing at all: indeed they were extremely “docile” and “submissive” about an inevitable result for Hawthorn in the vast majority of matches.


“Marianismo”, in Latin American folk culture, is the veneration for feminine virtues like purity, moral strength, etc. Marianismo represents the “virgin” aspect of the virgin-whore dichotomy. Evelyn Stevens states that marianismo teaches that women are semi-divine, morally superior to and spiritually stronger than men.”

The ideas within marianismo include those of feminine passivity and sexual purity. There is power in marianismo that stems from the female ability to produce life.

This term supposedly derives from Catholic belief in the Virgin Mary as both a virgin and a Madonna. According to the New Testament, she was a virgin when she gave birth to Jesus. She was eventually given the title “Mother of God” and thus became a subject of veneration and admiration. From this is derived the idea that an ideal woman should be spiritually immaculate and eternally giving.

This ideal woman is emotional, kind, instinctive, whimsical, docile, compliant, vulnerable, and unassertive. She has a higher status in the community if she has children and is a caring mother. She is also pious and observant of religious laws.

Hawthorn’s extreme success during the 1970s and 1980s can be explained using a word more familiar to most Australians: gerrymander. It might seem odd to associate gerrymanders with sport rather than politics, but the 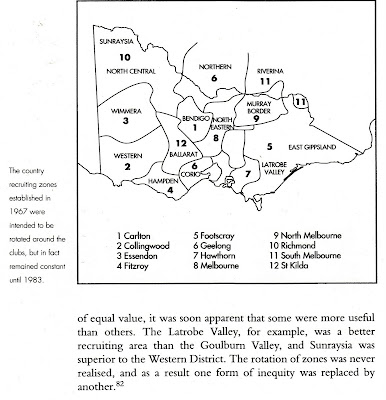 country zoning system which has long been acknowledged as the cause of Hawthorn’s eight premierships between 1971 and 1991 can undoubtedly be called a gerrymander, even an “accidental gerrymander” as country zoning was never designed specifically to help Hawthorn.

However, Hawthorn’s zone had three times as many boys as Collingwood’s (by no means the worst zone), which, by definition, is “a form of boundary delimitation in which constituency boundaries are modified to favour a particular group” (here Hawthorn and in a lesser degree Carlton, Richmond and North Melbourne).


Gerrymandering is a form of boundary delimitation (redistricting) in which electoral district or constituency boundaries are deliberately modified for electoral purposes, thereby producing a contorted or unusual shape. The resulting district is known as a gerrymander; however, that noun can also refer to the process.

When used to allege that a given party is gaining a disproportionate power, the term gerrymandering has negative connotations. However, a gerrymander may also be used for purposes that some perceive as positive, notably in US federal voting district boundaries which produce a proportion of constituencies with an African-American or other minority in the majority (these are thus called "minority-majority districts").

The word gerrymander was coined by a newspaper editor in reaction to a redrawing of Massachusetts electoral boundaries under the then governor Elbridge Gerry. In 1812, Governor Gerry signed a bill into law that redistricted his state to benefit his Democratic-Republican party. One of the resulting contorted districts was said to resemble a salamander. The term first appeared in the Boston Centinel on March 26, 1812.