Is the Guinness Book of Records biased?

In recent times as I have read stories of stigmatics like 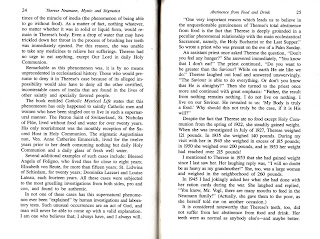 Thèrése Neumann and Marthe Robin, I have wondered whether the fabled

Guinness Book of Records really is rather biased.

Although I had heard of “supernatural fasting” from Sara Maitland’s 1983 A Map of the New Country, it was quite some time before I took these claims seriously as a result of reading Sophy Burnham’s underrated The Ecstatic Journey: Walking the Mystical Path in Everyday Life, which spoke of Catherine of Siena as having fasted for seven years.

Probably because of
I have tended to believe stories of people surviving on nothing apart from Holy Communion without looking at the scientific evidence on either side. As a matter of fact when I try to talk the issue over with my brother – who is militantly anti-religious and says that the only purpose of stories of inedia is to make women more submissive (in fact, women of the psychological type of potential stigmatics are of course going to accept an all-male hierarchy as an absolute requirement of natural law).

The whole issue, I think, is that the psychological make-up of the two sides of the culture wars are so different that either side understanding the other is in essence out of the question. This difference is
In this context, it is easy to see how scientific investigation of inedia is of course going to be dominated by claims of bias: I don’t consider it unfair to say balance is impossible. It is also true that
The best final word, from that same book - and indeed the best summary of this extremely difficult and culturally inherently divisive question, is:


Although fraud seems to be a frequent explanation for the apparent ability to survive without eating, there do appear to be a few cases that are not so easily dismissed

That is a fascinating topic! My mother and brother often say eyewitness evidence would be needed for every single moment of a period of supposed inedia, but perhaps there are other means of verifying fasting??

It makes one wonder what means could certify Alexandrina da Costa having eaten and drunk nothing except Holy Communion for thirteen years. there was apparently medical surveillance for at least sixty days, by my mother and brother view it as totally biased because of the interests of the Salazar regime in repressing the Marxism that most of Portugal’s working class believed in at heart.