Cricketers Who Missed Out: An Introduction 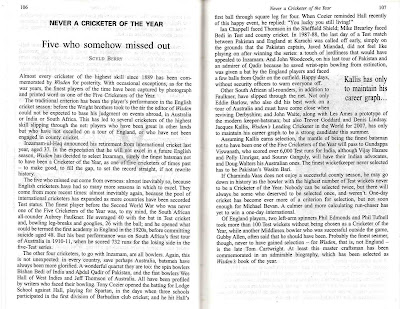 who missed out on being a Cricketer of the Year, and profiles Abdul Qadir, Bishan Bedi, Wes Hall, Jeff Thomson and Inzamam-ul-Haq. I myself am not certain about Thomson and Qadir, neither of whom did their best bowling in English conditions, and could have favoured Gundappa Viswanath on number of runs scored alone, Sarfraz Nawaz on the basis of his strength and his English record, or Trevor Goddard, who must have been unlucky not to be chosen in place of Frank Tyson in 1956. (Tyson's selection is an oddity being based on his doings in Australia as he was injured for half the English season).

Ever since I first read the article at the beginning of this year, I have wanted to have a look at another group of players (of whom one is mentioned in the linked text) who missed out on being a Cricketer of the Year for reasons quite different from the five players mentioned above. In the Wisdens of 1913, 1921 and 1926, there were no Cricketers of the Year. Instead, there were special portraits of Almanac founder 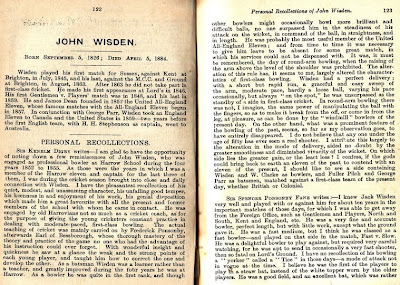 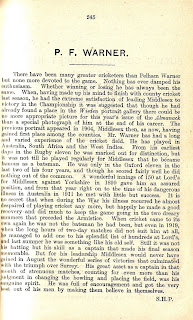 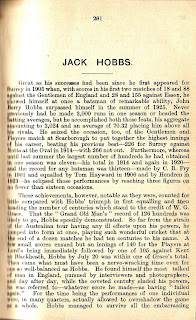 Ever since I first noted these omissions as a result of merely looking through Wisden's Births and Deaths of Cricketers, I have wondered who missed out as a result of these decisions. Recently I have tried to contact Wisden without success about this question, so it is clear to me I must work on this sadly neglected issue in cricket history myself. I thus plan to discuss likely and potential Cricketers of the Year for 1913, 1921 and 1926 in my next few posts.

It is a pity I have obtained no photographs of most potential candidates, but I hope you will learn much nonetheless.
on Saturday, December 05, 2009