A difficult mother’s birthday - and a wonderful cake!

This past few weeks have been difficult for me owing to my mother having to have two operations for a breast tumour and my having to spend three hundred dollars to replace the whole frame of my bike. The problem was discovered in an unusual manner when I was travelling to visit Christian Ganaban in Richmond and the bike appeared to move out of alignment.

This has made me very nervous about my future, with concern I will have to work much harder than I have been doing lately. The last few months have been dominated by grazing and grazing on Sesame Wheats and Monte Carlos, so that my mass, which over the middle 2000s I had curbed the growth of and even achieved some loss, has risen to quite unprecedented levels.

In spite of this, today I have done a good deal to redeem an appallingly late night where I was not in bed until 3:00. After recovering from a prolonged sleep, I went quickly to get the 1999 Geelong v Melbourne game from Christian Ganaban and to re-deposit money in my saver’s account that had been used to pay for the bike frame. I did not - as I have been doing - hand around Name A Game, but after buying meat, mushrooms, cake and ice cream went straight to prepare for a dinner planned by my mother of steak, chips and mushroom sauce. After buying the steak and mushrooms, I came home to cut the potatoes and watch a surprisingly good game between The Cats and Demons in a year when both became awfully disappointing.

When Mummy came home at 18:00, I had already prepared the food for cooking, and we cooked it very well - indeed only one of the two steaks was required. I enjoyed the dinner even if I expected more varied flavour and Mummy said not to cook the onions and garlic I had prepared as she wanted a pure mushroom sauce for the steak.

The highlight of the day, however, was the way in which the cake shop (I am familiar with it but have never bought from it) gave my mother 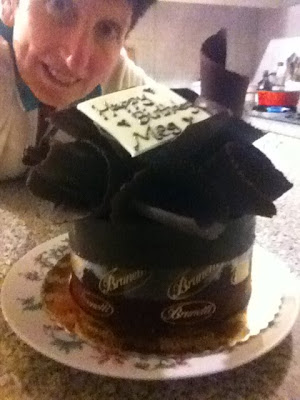 a piece of white chocolate with “Happy Birthday” on it! She was amazingly delighted, even though we had to remove the chocolate spirals to cut the cake into a piece small enough for eating, and in my view the cake and ice cream (of which there were two flavours, vanilla and banana, which I bought because bananas have been appallingly expensive ever since the major cyclones of last summer) were the real highlight of what I fear in my worst dreams will be my mother’s last birthday dinner, although she says that the cancer is not invasive and will not reach the lymphatic system.
on Wednesday, June 22, 2011