How the tsunami has revealed a crisis

According to today’s Bangkok Post, the March tsunami has actually had the serious problem of exacerbating the 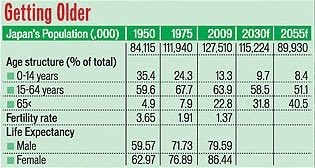 demographic crisis that has been hitting Japan over the past thirty years.

Whilst the statistics are familiar, what is new is the fact that Japan, despite its exceptionally high population density from the richest fisheries in the Earth’s geological history, and its reputation for encouraging older people to continue working as long as they are physically able to do so, is suffering from an acute labour shortage that will only get worse as the proportion of its population of working age declines by fifteen percent over the next forty years.

The remedies offered, however, really do not look at the problems of Japan’s land scarcity or even the issue of whether government spending is the cause of Japan’s appallingly low fertility, especially with the extreme scarcity of usable land to complement its super-rich seas. Although Wendell Cox says:

“As for agricultural subsidies… they would not be the cause of higher housing prices, in my view, unless they block the construction of housing. The subsidies themselves are unlikely to raise the price of land sufficiently to make it too expensive to purchase for home building.”

firsthand experience in Japan certainly does suggest to me that agricultural subsidies, which encourage part-time farmers to remain working on very small plots with low-value crops like rice, are blocking the construction of housing that would alleviate Japan’s high prices and most likely increase its birth rate at least somewhat. I have not researched this question myself, but the extent of Japan’s farm subsidies is such that one can doubt Wendell Cox’s claim: rice prices are set orders of magnitude above the world level and imports are very severely restricted. Still, the long-term consequences for Japan of industrialisation are at the same time:
This has profound effects on Japan’s post-industrial demographics, because the ability of fishing to support communities without demographic decline is in fact weaker even than farming. Even in the cold and rich North Pacific, fisheries cannot compete economically with extensive pastoralism as a protein source, no matter what Martin Taylor might say about government aid to Australia’s pastoralists. Thus, it would take a lot of thought to see how to make Japan’s main natural resource valuable enough to allow for family formation and encourage a less materialistic culture. This is especially true when one considers that the ethos of East Asian culture has been less hostile to materialism than Christianity.
on Monday, July 25, 2011