My brother knew the story

For a long time, I have had a vivid memory of a day in 1990 when Canterbury-Bankstown were playing Eastern Suburbs and I watched on Channel Nine in our old Keilor Downs house, when my brother interfered and asked why I was watching the rugby when football games of probably lower standard were on at the same time. My brother’s response when I refused to turn off the rugby was:
The idea of a “sharp mouthguard” is so laughable and funny I cannot help chuckling whenever I think of it! 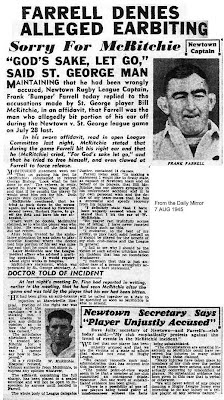 What, however, has surprised me in the past day is that my brother, before he watched the initially-mentioned game between Canterbury-Bankstown and Eastern Suburbs, actually knew even in 1990 as a ten-year-old of the one verifiable case in rugby league of someone actually biting ears. This was by Frank Farrell, nicknamed “Bumper” against St. George prop Bill McRitchie in 1945 during a scrum. What this does mean – and nothing else – is that my brother’s attack on rugby was actually based more on known facts than I thought.

Still, even with this alleged biting, rugby really is not that violent a game because contact is so rigidly restricted to the player holding the ball. This is why rugby has never been as dangerous as gridiron or ice hockey – sports where the aim would be literally to kill, were the aim of rugby what my brother in 1990 said it was. In fact, rugby league authorities in Australia understand exceptionally well that rules, playing conditions and efforts to be severe on serious offenders do a lot more to keep a sport fairly safe than heavy armour.

Indeed, in the early days of gridiron players were killed on a regular basis, with eighteen deaths in top-level gridiron in 1905 and according to some sources twenty-six in 1909. Ice hockey has also produced a number of deaths and near-deaths, most notably when Buffalo Sabres goalkeeper Clint Malarchuk had his jugular vein cut by a skate during a game on 22 March 1989 against the St. Louis Blues. He was lucky to survive, but the incident shows how much sharper ice hockey skates have become since my old Rules of the Game book of the 1970s was published. Howie Morenz and Bill Masterton also died on the ice during National Hockey League games, but in rugby league there is no record of someone dying during the season or training.
on Monday, July 09, 2012