Is parking the problem for traffic and transit?

The problem that car parking on narrow streets poses is something I have known for a long time. It is particularly problematic for trams and buses in Melbourne. As things stand, these vehicles cannot generally get to where they want to go quickly enough to compete with more greenhouse-intensive private cars, especially on such narrow roads as Sydney Road (tram 19), Glenhuntly Road (tram 67) and Burke Road (tram 72). The PTUA has long advocated speed limit restrictions to make sure that private cars cannot outspeed trams, so that trams become able to move with a steady flow rather than in a slow stop-start manner.

I have long thought that parking bans on such narrow roads as Glenhuntly Road, which would force all motorists to park in back streets or off-street, would be a better means of dealing with slow tram movement. Speeding up tram movements would reduce Australia’s dreadful greenhouse gas emissions, and car movements through these narrow roads would also be increased if car traffic could flow near the kerb rather than only upon the tramway.

Amy H. Auchincloss, Rachel Weinberger, Semra Aytur, Alexa Namba and Andrew Ricchezza have looked not at the relationship between parking restrictions and public transit use, but at that between parking fines and public transit use in the United States. The article, titled ‘Public Parking Fees and Fines: A Survey of U.S. Cities’, argues that higher parking fines, plus higher on- and off-street parking fees, do correlate with greater public transit use even in low-density cities like those of land-surfeited Australia – although this correlation is greater in high-density cities.

The study groups argues, however, that there are many variables that can influence public transit use which are not related to the availability of parking, which are only briefly discussed by comparing low- (land-rich) and high- (land-poor) density cities. There is also the argument that planning is very poor across cities, and especially critical in Australia is community opposition to restricted parking. 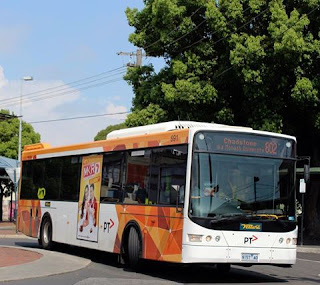 It is also true that ‘Public Parking Fees and Fines: A Survey of U.S. Cities’ does not discuss the low-density suburbs and exurbs that constitute the major problem for solving global warming with their car-dependent transport systems and frequent absence of any public transport apart from school buses that the public are permitted to use. As I can testify from riding these limited low frequency part-time bus services (the route 802 shown runs hourly with no service on weekends whatsoever) between shopping centres, even during the midday hour, occupancy in the suburbs of Melbourne is never such as to make the driver search for a parking spot. My observations of the big shopping centres like Chadstone, Northland, Westfield Doncaster and Eastland, although they do suggest quite high occupancy rates that could reach 70 or 75 percent, never suggest any parking shortage even with absolutely free parking. This is even more true of on-street parking in smaller shopping centres – land is so abundant that I have never observed “cruising” to find a parking spot.

If this general abundance of space extends to the United States, it may explain why Auchincloss, Weinberger, Aytur, Namba and Richezza did not look at suburban and exurban parking availability. It might seem logical to introduce parking fees there as a means of paying for improved public transport; however history shows to my intense frustration that the people of Melbourne’s exurbs have too little desire for better public transport – and absolutely no ability to accept that ownership of one car over the entire region, let alone the typical three per house, is inherently ecologically unsustainable! Moreover, exurbanites would feel frustrated paying anything for parking in areas of such abundant land.

The potential for increased car use on roads from restricted parking – as seen on freeways – is another reason to doubt that changes to parking laws by themselves can increase public transit use in Australia from under ten percent to the requisite value near one hundred percent. Nonetheless, the present system, which has made for very expensive housing in the inner city and done nothing to improve globally critical exurban public transport, is one that needs change much more than politically practicable within Australia.
on Monday, August 11, 2014