As Time magazine shows another year of record hot global temperatures, we see that the country whose populace (per person) bears most responsibility is still doing absolutely nothing to ameliorate climatic changes. Australia has since at least 1980 had, alongside analogous high-income resource-rich nations surrounding the Persian Gulf, the highest per capita greenhouse gas emissions in the world, as shown by this map from 2005.
When we consider CO2 emissions from the longer 1950 to 2000 period, Australia is less striking but its per capita emissions remain high compared to Europe, East Asia and most of Latin America. 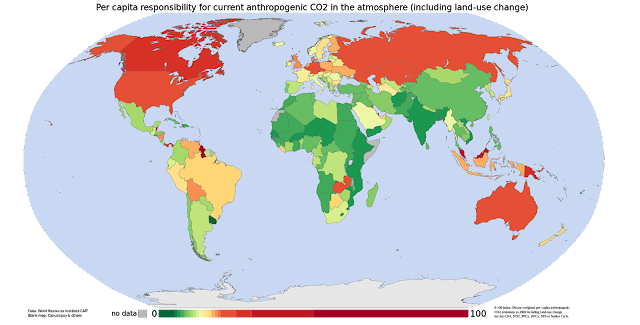 Yet, when diverse countries with opposing interests met as “Annex B” nineteen years ago for a protocol to regulate global greenhouse gas emissions, the Persian Gulf oil states were given no targets at all, whilst Australia was allowed an increase of 8 percent over its 1990 emissions. In contrast, European nations with (1990) per capita emissions one-fifth Australia’s were required to reduce their emissions by 8 percent.

Even permitted such a target, Australia under John Howard refused to sign. Australia’s real powerbrokers – the coal and aluminium industries (Crowley, 2007) alongside car-dependent suburban  families – voted Howard into power. These groups had and have a stake in unlimited greenhouse emissions because that allows them lower taxes and living costs, plus higher corporate profits. Australia’s major parties have had to work within the bounds set by these groups, which simply forbid any reductions in emissions. Aluminium, coal and farming interests, who would surrender their wealth and political power if required to make the requisite in emissions to avoid dangerous impacts from global warming, set rigid limits to policy, as seen in Australia’s carbon tax fiasco earlier this decade. Australia’s greater economic and demographic growth vis-à-vis other “developed” nations – not to mention its limitless reserves of important but energy-intensive aluminium and titanium ores – ensures that as presently framed Australia can simply ignore global demands for reduced emissions.

Officially, Australia’s refusal to ratify the Kyōtō Protocol was due to the absence of participation of so-called “developing” or “Third World” nations. In reality, excepting high-income oil exporters – whose global economic role is analogous to Australia’s as a wealthy coal/lithophile metal exporter – the per capita contributions of “developing” (“G77”) nations to global greenhouse emissions are small. One decisive problem dooming Kyōtō was “G77” nations failure to demand deep and immediate emissions cuts from high-emissions oil exporters inside their ranks. Failure to confront the oil exporters head-on allowed those nations to escape even more scot-free than did Australia. Indeed, Kasa et. al. (2008) has revealed the “G77” as an alliance between unwilling oil exporters and powerless but culturally aligned (via Islam or indigenous culture) Least Developed Countries, and thus wholly ineffective for reducing emissions.

To achieve large cuts to global emissions before 2010, an alliance was required between the industrial high-technology nations of Europe and East Asia on the one hand, and the Least Developed Countries on the other. Despite the large differences in these blocs’ cultures, lifestyles and living standards, they share an economic interest in low emissions because they are:

This requisite alliance would have been directed at Australia, the OPEC States and Southern Africa, demanding rigid and severe emissions reduction targets there without opportunity for negotiating compromise. A move for deep uniform cuts, strict baselines, no bubbles or baskets, fewer gases, early timetables and the exclusion of sinks was proposed for the disparate “developed countries” by the Alliance of Small Island States (AOSIS) (Liverman, 2008). AOSIS made credible demands – unfortunately aimed toward a bloc with conflicting interests. If AOSIS and the Least Developed Countries had focused their ire on Australia, OPEC nations, and perhaps South Africa, they might have gained essential support from the EU and East Asia and campaigned for exceedingly deep and rapid emissions cuts for Australia and OPEC.

The actual costs of deep emissions reduction in these critical nations are unclear, but Australia – the worst offender given its ancient land and low-energy ecology (Orians and Milewski, 2007) that biologically demands it have the world’s lowest per capita emissions rather than the highest – could certainly transform to a solar energy- and ecotourism-based economy if the polluters were less powerful. OPEC nations with fewer options would have more trouble, but Barnett et. al. (2004) has suggested that losses could have been made minimal by an accord similar to the Marrakesh Accord. As for the resource-poor manufacturing and Least Developed nations, modifications of their economies (for instance designing goods to last longer and consume fewer resources in the long term) would multiply the effect of eliminating the emissions of the mineral states.

The basic message from the middle 1990s Kyōtō negotiations, and indeed from the Kyōtō Protocol itself, is the failure of blocs based primarily or even substantially upon culture. Needed were and are blocs based upon ecology and economic interests. It is logical that the small number of fossil fuel- and lithophile metal-rich nations with high per capita emissions would be outnumbered, and the rest of the world would demand the severest and quickest emissions reductions by the mineral exporters. This was where Kyōtō should have began, not as a virtual dispute over a serious issue between nations whose economies and ecologies lie diametrically opposed, and we continue to pay the consequences.