As an indirect result of reading about the problem of homelessness in Anchorage (which in winter is not the coldest “major” city in North America, being milder than Fargo, Duluth, Winnipeg, Regina and Saskatoon), I have had a look at the winter climate of Fairbanks. Fairbanks is the coldest major city in North America and the third coldest over 100,000 in the world (though a long way behind Yakutsk and Norilsk which are both about 6.5˚C or 11.6˚F colder), but its winter climate is extremely variable due to Fairbanks’ location in the lee of the North American Cordillera.

All along from Interior Alaska to West Texas, this positioning produces a winter climate influenced by “chinooks”, warm adiabatic winds descending from mountains over 4,000 metres high. When chinooks are present, winter temperatures can be extremely warm relative to long-term averages, creating temperature variation over this “chinook belt” that are not rivalled anywhere else in the world. For instance, although the mean January temperature in Fairbanks is -10˚F or -23.3˚C, absolute maxima are as high as 10˚C or 50˚F. In contrast, in East Asia places with similar average January temperatures seldom if ever top freezing. Further south in the “chinook belt”, similar contrasts continue: at Havre, Montana where the mean for January is around -9˚C or 16˚F the record maximum is 68˚F or 20˚C whereas Shěnyàng with a similar average has never exceeded 8.6˚C, and  Rapid City in South Dakota with an average of -3˚C has an absolute maximum of 24˚C – hotter than Melbourne’s absolute midwinter maximum of 22.2˚C.

In fact, in the record-warm February 1954 (actually the third-coolest here in Melbourne since 1895) Rapid City was hotter than Melbourne on one day (before checking I assumed that number to be much greater) but via the graph below one can nonetheless clearly see the contrast between abnormally cool weather here and abnormally warm weather in the central and southern “chinook belt”:
Getting back to Fairbanks, I compiled a graph for all winters since complete records began in 1906/1907 of number of mornings that reached to -36˚F or -38˚C. As the daily mean temperature, -38˚C constitutes the Köppen threshold for an extreme subarctic climate (Dfd or Dwd, as found in northeastern Siberia),: 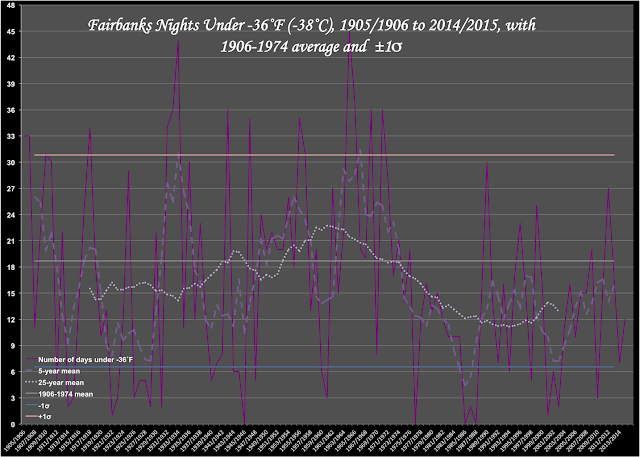 As we can see, there have been a clear decrease in the number of minima under -36˚F or -38˚C (exactly -37.777777...˚C) since man-made greenhouse emissions took firm control of the climate in the middle 1970s. Whereas thirteen winters were more than one virgin standard deviation above the mean number before 1974, not one has been since. Once does see between 1906 and 1974 a seemingly natural quasi-regular cycle of milder and colder winters, with peaks in extreme cold observed between 1932 and 1934, and during a longer period between 1964/1965 (the record with 45 minima below -36˚F) and 1975/1976. This cycle even persists into the post-1974 period with the minimum circa 1987 (only two nights below -36˚F in three winters 1985/1986 to 1987/1988), but the effect of greenhouse emissions from Australian coal power and road transport can be seen already in the 25-year mean, which under preindustrial or even early-industrial CO2 levels would likely have increased substantially during the 2000s – a viewpoint professional studies appear to agree with.

If we have a look at the other (more distinctive) side of the “chinook belt” climate – abnormally warm winter days relative to position – we see a different story: 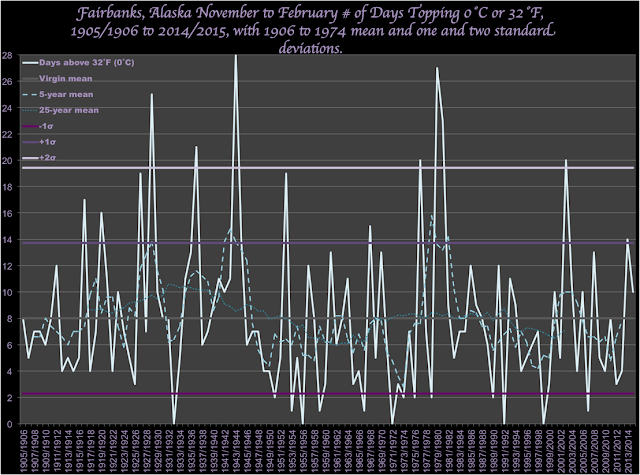 Unlike with very cold weather, we do not see a systematic increase in very warm weather over the (northern) “chinook belt”. There is a distinct peak in November to February days above 0˚C around 1980 – an era which still contains Fairbanks’ warmest November (1979), February (1980) and January (1981 – with seventeen days topping freezing), but also contains a record cold February 1979 and near-record cold December 1980. I have not yet checked other regions of North America, but it’s possible that the great natural variability of winter weather in the “chinook belt”, as this last graph shows, can overshadow the drastic effect of Australian coal power, land clearing and road transport upon the atmospheric circulation of the Earth.

This perception may also explain the strong Republican leanings of the “chinook belt” compared to the rest of North America away from the low-nutrient and naturally conservative non-“Black Belt” South. Like Australians who are used to extremes of drought and flood, people in the “chinook belt” are used to such changeable winter weather than the effects of their own greenhouse emissions may seem much smaller than to people from regions without potential warming Föhn winds in a very cold climate.
on Tuesday, March 29, 2016