In my previous post, I demonstrated the the Kyōtō Protocol of 1996 almost entirely targeted countries of limited significance, and whose ecology (Lovegrove, 2000) does not dictate low energy consumption. The Enriched World, where every “Annex 1” country bar Australia was located, constituted the ecological bloc least required to lower emissions for ecological parity (Koch, 2003, p. 147; Najam et. al, 2003). Thus, the countries set emissions targets were – with the paramount exception of Australia – the very countries with least requirement therefor. 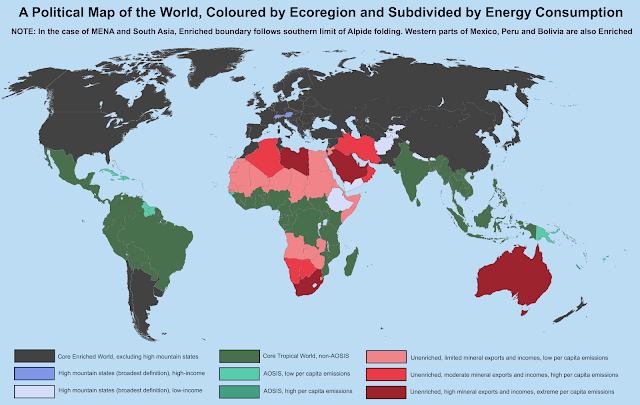 Nonetheless, within the Enriched World a sub-bloc of nations with elevated per capita emissions did exist. This sub-bloc comprised three Anglophone Western Hemisphere nations in the United States, Canada and New Zealand, plus four countries in Northern Asia: Russia and the former Soviet republics or satellites of Kazakhstan, Turkmenistan and Mongolia. The following facts confirm these nations as a distinct sub-bloc:
If we combine these countries with China, which borders this region on its southwest flank, we create a continuous bloc of seven countries accounting for over forty percent of total global emissions.  On this ground, targeting this bloc for punitive emissions reductions (demonstrably necessary for Australia and Gulf oil states) would have appeared desirable.

However, the economic disadvantages of their cool climates, plus their low ecological fragility (Huston and Wolverton, 2009) and their void in bauxite deposits, mitigate against severe relative targets for even the worst Enriched polluters. Moreover, historical climate politics demonstrates the likelihood or the United States and Canada siding with Australia rather than lower-emissions Enriched nations (Flannery, 2007). New Zealand, Russia, and the former Soviet satellites behaved similarly. Consequently, I have made a 20% allowance above parity targets for all nations in the sub-bloc. Essential emissions cuts by Australia and the Gulf States would mandate large efficiency improvements elsewhere, which would have reduced this elevated-emissions Enriched sub-bloc’s emissions beyond the targets listed below.

Suspicions that after-effects of the Kyōtō Protocol have been a major factor in the United States’ growing partisan political divide has led me to propose a substantial allowance for that nation. This allowance has the virtue of simplifying matters for the sub-bloc as a group.

I have tabulated China although it differs from the other nations of this sub-bloc in its dense population because:
Overall, these proposed direct reductions in the elevated-emissions sub-bloc would triple those from the much severer reductions ecologically demanded from the oil exporters and Australia (see previous post), totalling 14 percent of global emissions. Unlike the radical infrastructure projects that were ecologically essential in Australia and oil states, reductions in these nations would have merely required improvements in efficiency from nations that for the most part were already wealthy, such as improved fuel efficiency technology in American and Russian road vehicles and homes, and altered product cycles for consumer goods to deal with the reduced supply of metals from Australia.