A map of the new climate 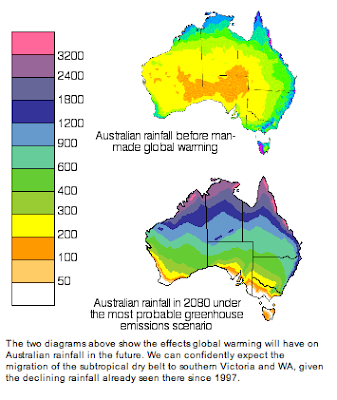 The new climate of Australia shown on this map represent a reversal of historic rainfall geography that beats anything I can imagine professional climate scientists will predict.

What I am predicting, as show on the map, is a penetration of the monsoon so intense that, as shown above, the 1000-millietre annual isohyet will correspond in northwestern Australia roughly with the present 300-millimetre isohyet. Instead of stopping at Darwin, in 2080 the monsoon trough will be centred at the latitude of Alice Springs. (Owing to the shape of Australia, it’s probable that there will be two distinct centres west and east of Alice Springs). With a powerful low dominating the weather over most of the continent during the summer, many playas that I could not draw will become permanently full of water. (Under the wettest scenario, Lake Eyre might overflow so that the “inland sea” dreamed by the early explorers becomes a reality!) Further north, the monsoon will begin around October and for seven months totals of 400 to 500 millimetres will be par for the course, with much more still in the mountainous parts of the Kimberley. This would make the Top End so wet as to change its Köppen climate class from Aw to Am and lead to the appearance of thicket forest instead of savanna.

The huge increases we can expect over northern Australia from an intensifying monsoon due to reduce reflection from the interior, however, will be no compensation for the total loss of the southern winter rain belt. As the map shows, the arid zone in 2080 will be centred over some of Australia’s largest cities and currently most biodiverse ecosystems. The loss of the mountain ash and karri forests to drying caused by global warming – which will occur within a few years – ought to be seen as comparably reprehensible (or worse) than what Khrushchev did to the native fish of the Aral Sea.

However, unlike the economies of Uzbekistan and Turkmenistan, Victoria’s economy could still survive without a single car on the road and with every house having solar panels to generate energy. Moreover, the fact that this has occurred in a representative democracy makes the people of Australia much more culpable for ignoring the problem.
on Friday, January 30, 2009