A prophetic message for sure

The mere lack of protest by most Australians at the results being seen now of global warming in Australia has done many things. It has turned me right away from radical groups like Socialist Alternative and the Democratic Socialist Party despite their laudable environmental policies. When I was attracted to these groups to the point of subscribing to Socialist Worker, I thought that because outer suburban real estate was cheap, outer suburbanites were poor and should according to Marxist theory have the same interests they did in overthrowing capitalism.

In fact, Australia's outer suburbanites are very much hostile to the kind of socialism advocated by Socialist Alternative, the International Socialist Organisation, or the Democratic Socialist Party. Because they are people with families, they do not want the violent upheaval that revolution would cause since it would impoverish them. Moreover, the low living costs mean outer suburbanites are really much richer than residents on much higher incomes in, say, Sweden. They do have financial concerns, but they feel that higher taxes and more regulation to produce remotely respectable greenhouse emissions will make them poorer and jeopardise the economy.

Trying to make sense of the failure of outer suburbanites to protest exceptionally high greenhouse emissions has recalled a book called Two Nations, published in 1998 amidst the rise of Pauline Hanson (my review on Amazon is here). Reading Michael Woolridge is the last chapter (pages 182 to 185) makes me think he prophesied the culture wars of 2000s America because the language he uses to describe the differences between the academic, Europe-like 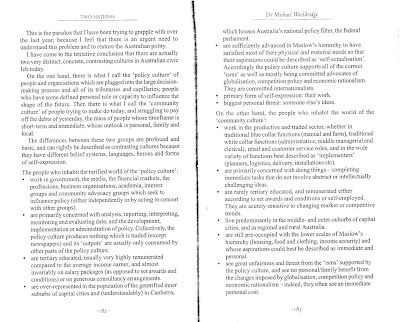 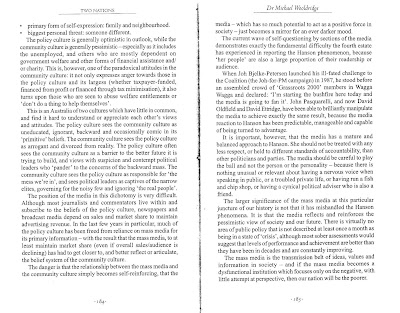 “community culture” is exactly like how the differences between Blue and Red America were described after the 2004 election. My experience communicating does tell me the kind of academic “policy culture’ is also found in Red America (see Hip Pocket Politics for details). On the other hand, in Europe, Canada and New Zealand the “community culture” has been in effect taxed out of existence, yet it is in Australia where the weakness of its cautious, risk-averse outlook is felt.
on Saturday, January 31, 2009