Are the CSIRO and Bureau of Meteorology becoming “industry-funded scientists?”

The ABC is suggesting that the Indian Ocean Dipole (IOD) is what is causing the alarming decline in rainfall over southern Australia since 1997. Research has shown that there has been an absence of negative IOD events that bring heavy rainfall to southern Australia. 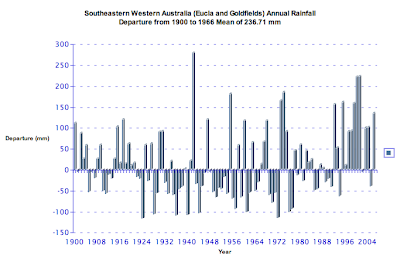 What most upsets me is feeling that studying the Southern Ocean instead of the Indian might mean loss of financial support for the CSIRO and Bureau of Meteorology. Southern Ocean research could quite likely tell even the most sceptical scientist that the changes in rainfall are beyond the tiniest doubt related purely and simply to man-made global warming. This is what the best paleoclimate record strongly suggests, and also what New Scientist has twice shown in the past week. I am indeed starting to fear that many people within the CSIRO and Bureau of Meteorology are industry-funded scientists whose research is compromised by the need to accept the right of fossil fuel and light metal industries to alter the climate no matter how catastrophic it proves for southern Australia, rather than writing articles demanding that the coal and light metal industries pay for a complete switch to renewable energy by 2020. In the long run if Australia’s carbon emissions keep trending up and up and up gains abroad will be rendered worthless.

When the evidence is too conclusive to accept downright sceptics’ opinions, the CSIRO and Bureau of Meteorology wrongly calm the public by assuring them the drying of southern Australia is a natural cycle. What they should be stating is that the drying of the climate is due to changes in the Southern Ocean and the position of the Hadley cell induced by man-made greenhouse gases and having utterly nothing to do with any natural cycle. They should say this as forcefully as possible, and focus their attention on conservative outer suburbs presently insulated from academic research.

I am sure that is what scientists from Europe or Japan, who are not watched over by corporate polluters, would say if they were investigating climate change in Australia. I am indeed beginning to think foreign scientists should be encouraged to research climate change in Australia independently. Seeing if they get different results would certainly answer the question of how much industry influences Australia’s status as a laggard in reducing greenhouse emissions.
on Friday, February 06, 2009