Although I have long been convinced that global warming will turn Australia's south coast – including southwestern Australia and western and central Victoria – into an arid zone, the weather of the past two and a bit months has made me sure not only that it will happen, but that it is happening now.

Although I have for a long time been very concerned for the fate of southern Australia and for the world's other mediterranean-climate regions because of their biodiversity, it is only now that I am realising that the present carbon dioxide level of 380ppmv is too high for the survival of mediterranean climates. Global warming will also desertify some areas on the fringes of mediterranean climates, such as southeastern Australia and parts of the American West.

This can be found in a much tighter polar vortex resulting from cooling of the stratosphere. It is known that cooling of the stratosphere results from increased carbon dioxide levels because less heat reaches the stratosphere from the Earth's surface. Those acquainted with polar ozone holes will realise that a cooler stratosphere means ozone is destroyed more efficiently by natural or anthropogenic chlorine and bromine. Thus, during periods when carbon dioxide was much higher than now, global stratospheric ozone concentrations would have been considerably less than the 320 Dobson units observed in the Quaternary. Because ozone losses would have been greatest over the poles, this would have meant that whilst the surface of polar regions in the Mesozoic was up to 40˚C (72˚F) warmer than today, at the tropopause where weather is generated it would have been colder. In the winter, absorption of heat by greenhouse gases in the lower polar atmosphere would have meant even less heat than today for the polar tropopause, which would have kept it as cold as the equatorial tropopause and pushed the jet stream and polar front rainfall close to the poles. 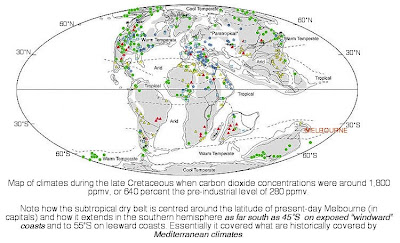 – turning it into a “midlatitude dry belt”. Along with it would come very warm conditions in the poles as the dry air absorbs heat whilst moving over the dry midlatitudes and picks up moisture which is turned into dense clouds in the high latitudes.

Combined with a powerful monsoon that would be expected from high greenhouse levels, the net result is that areas historically covered by mediterranean climates form the arid zone, whilst historically arid regions become monsoonal. Some evidence actually indicates the arid belt even at mildly higher carbon dioxide levels moves to between forty and fifty degrees from the equator. For instance, there is evidence of savanna (monsoon) climates as far north as Turkey in the Miocene when carbon dioxide was only around 400 ppmv. This suggests that we must expect basically no winter rainfall in southern Australia from this year onwards – and in the absence of summer rainfall years passing without rain, creating deserts more extreme than any in historic Australia right in the middle of major population centres like Melbourne and Perth, plus possibly Hobart, Canberra and Adelaide.
on Thursday, February 19, 2009