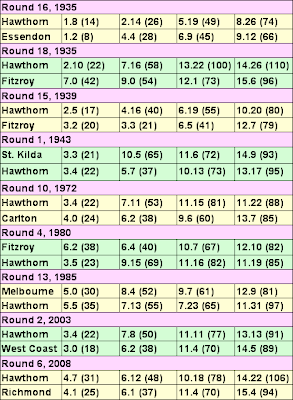 Once when I was in an interesting secondhand bookshop northeast of the Valerie Street Interchange in Kew, I discovered an article in one edition of the Football Record (I failed to find it searching again yesterday) which talked about VFL (now AFL) matches in which the winning team had scored fewer goals. The article pointed out that there had not been a single case in 1983 or 1984 but predicted (rightly) that there would be in 1985. It also pointed out how Collingwood beat Essendon with two fewer goals in 1980.

Although I had enough knowledge to realise it was possible for a team to win a match despite scoring fewer goals than its opponent, there tends to be little discussion in football histories of such cases. This is probably because in most matches where the winning team scored fewer goals they displayed much more skill but frittered it away (this was the description given of Fitzroy's 1989 win over St. Kilda in Tony Lockett's last match for that year). Very few such games are upset wins (Melbourne's 1934 win over Richmond - the Tigers' last loss before winning the flag eight games later - being the most notable that was) though quite a number are remarkable comebacks (Melbourne in that game were at one point six goals behind).

Teams winning despite scoring fewer goals may seem curious to me because before I knew much about football I asked Mummy why a winning team won. She said "Because they kicked more goals". This was true absolutely for 1983 and 1984 when there was neither a single drawn match nor a single match won by the team scoring fewer goals.

If you want to look in detail at matches won with fewer goals, Rogers Results has a site here. If you look through that site you will see that Hawthorn of the clubs established before the 1980s has won the fewest matches kicking fewer goals, but remarkably the two biggest wins with fewer goals were both by Hawthorn (in 1935 and 1985). Between Round 2, 1943 and Round 9, 1972, however, Hawthorn never won a game with fewer goals, though it lost kicking more goals to Melbourne, Collingwood, St. Kilda, Carlton and Richmond in Michael Tuck's senior debut.
on Sunday, May 24, 2009