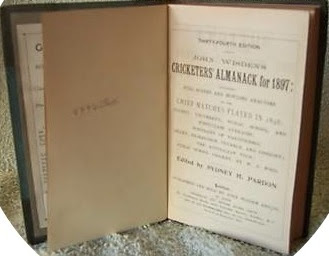 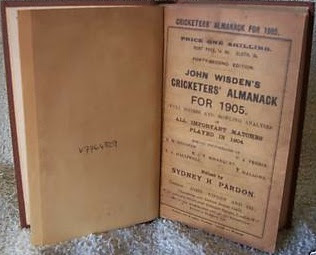 1905 respectively. Both were in wonderfully good condition for their age and provided much more information than I obtained via copying county matches in the State and MCG Libraries over a decade ago.

Upon receiving them, I read them voraciously through trips into the city for shopping and then in Latrobe University Library to read about the Doug Cox case that undermined the VFL's zoning system. After that, I went into the city to do some shopping and when I came home, still voraciously reading my Wisdens, I found that I was missing the 1905 edition just as I was eager to tell Mummy about them.

Mummy was disheartened at the news. From my description of what happened, she told me that it was most likely that the Wisdens were on the 251 bus. However, when I rang up, I became very annoyed indeed because the National Bus Company does not open its offices even on Saturday (though its bus routes run seven days a week). My temper flared at this because I had grave fears that someone would take the 1905 Wisden and keep it, even though I knew my obsession with old county cricket is a rarity in Australia. Mummy was very sad at me screaming and she told me that whilst I feel it will prove a call for help, screaming actually makes others less willing to help me. I tried not to scream even though I feared the $200 Wisden was already gone for good - feeling that I should punish whoever stole it violently.

Eventually I decided to e-mail the National Bus Company in case the old Wisden was not stolen, with a picture. I also thought of the bus stop in Lonsdale Street and the underground city Safeway where I bought milk as possible places where I might have left the 1905 Wisden. I did recall my leaving of Sappho: A New Translation in a shopping trolley in Essendon and knew it could happen easily to books I read voraciously. I thus, after some fidgeting, rang the Lonsdale Street Safeway and told them about the 1905 Wisden and features that should help recognise it.

After continuing to look for features that might help me recognise the 1905 Wisden, we continued to talk until a call came. Surprisingly, it was from the Safeway in Lonsdale Street, telling me they had found the 1905 Wisden. Mummy offered to take me there, but I said that because I did not want to waste my public transport ticket I would go myself and lighten up my red bag.

When I came home with the 1905 Wisden, Mummy said that I had to learn to be calm and not in a panic mood as I always am upon losing something. However, I find it hard to imagine I could ever learn not to panic without her help and find it terrifying to imagine what would happen if I couldn't call her in such a case. Mummy herself said, that contrary to my claims I am really bad or that nobody loses something so valuable as a 1905 Wisden, she had lost an equally valuable wallet in Dalian during January and that people frequently lose laptop computers worth ten times as much as my Wisden. My reply is that I value these old Wisdens more even than a dearer computer.
on Friday, May 15, 2009