The Bureau of Meteorology, in its 2000 and 2006 annual climate summaries, pointed out that whilst the first year was the second wettest since 1885 and the second averaged over Australia slightly above average, most Australians would have perceived

2000 to be either drier than normal or near normal and

What one sees on both graphs is that in the virtually uninhabited north and central-west of the continent are huge areas where the 2000 and 2006 rainfalls were all-time records. The major difference between the 2000 and 2006 rainfall patterns is that the super-powerful monsoon that brought the record rainfalls in both years did not penetrate over inland southeastern Australia or the pastoral districts of South Australia in 2006 as it did in 2000. (This may be because global warming has weakened southern fronts sufficiently that they cannot interact with a super-powerful monsoon to produce rains over these areas during summer, as happened in the first half of January 1974). Another difference is that the spring rainfalls in 2000 were quite heavy even before the tropical flood season began in November with torrential rain around Mackay.

Today, I have tried to investigate these patterns and see what results one can get about recent years by excluding the 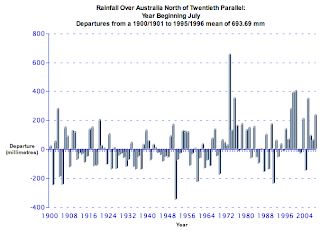 north and central-west of the continent from the rainfall records. It is a pity that the "Data Portal" at the Bureau of Meteorology’s site does not allow me to combine the areas remaining with southwestern Australia where global warming has been causing major declines as far back as the latter half of the 1970s.

Still, the graphs are of great value. The one for northern Australia mentioned above is particularly revealing about the year 1952 and the non-existent monsoon of 1951/1952, which is shown beyond doubt to have been the driest wet season on record in northern Australia – occurring during a year when Victoria had its fourth wettest year since 1885. The one for 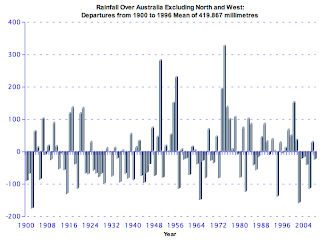 Australia excluding the north and central-west , though distorted by rainfall over the arid interior, does show a clear decline in rainfall over Australia outside these regions since 2002, when only 2007 has had higher rainfall than before man-made global warming affected our climate. it is also noteworthy that if we exclude the north and central-west, 2006 and also 1982 stand as among the ten driest years averaged over Australia, and

1952 instead of being the sixteenth driest year since 1900 comes as wetter than average if not nearly so wet as it was over the most settled parts of the continent.

The whole issue is that man-made global warming is, in the long term going to cause a complete reversal of rainfall patterns over Australia, so much so that the most arid regions of the continent by 2050 will no doubt be regions historically receiving heavy rainfall, whilst what were once famous as deserts become (equally inhospitable, actually) monsoon swamps. People in Melbourne cannot perceive the extreme rainfall variability of central Queensland and how it prevent cropping, and nor can they perceive easily why a poleward expansion of the Hadley circulation that dries out their dams can greatly increase the Australia-wide average rainfall though soaking regions formerly lying in the descending limb now centred right where I am living.

This is why people in Australia talk of a big dry at a time when the continent overall is much wetter than it has been over most periods since 1885. One wonder what people in Melbourne will say in the soon-to-come year when the city receives less than fifty millimetres in a year and most of the Centre and Gibson desert receives over a thousand millimetres in a few months under a hyperactive monsoon!
on Thursday, July 23, 2009