In today’s Age, Brian Buckley shows that devastation is threatened by Melbourne having a projected population of seven million by 2049 – and this in a city with no fresh water and a climate as hot and dry as that of Arabia!

Buckley is right to be appalled that Melbourne emits more carbon than London – a city twice the size and living on soils with an order of magnitude more soil nutrients per unit area.

If ecological justice remotely existed, the average resident of Melbourne would emit no more than one thousandth the carbon of the average European city, simply because the ancient Australian environments are so fragile.

To achieve ecological justice Australia must:
The trouble with achieving any of these goals is that Buckley cannot understand the emotional benefits a sprawling city has, viz:
A fast-paced and hectic lifestyle, as Rod Dreher wrote in his excellent book Crunchy Cons, encourages a shallow, highly materialistic and unemotional lifestyle in which satisfaction of the ego overrides everything. 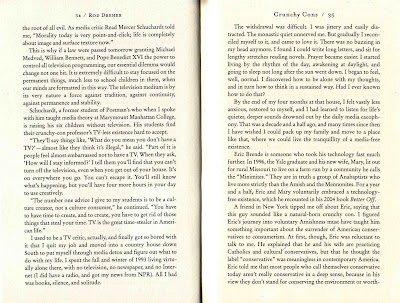 Dreher argues that the lifestyle of noisy cities is of itself as force against tradition. Sprawling suburbs, as I can testify living in Ashwood and Keilor Downs, are much quieter and slower-paced, giving people much more time for reflection. The slower pace also offers, according to Dreher, opportunities for socialisation that are hard in the inner city. E. Michael Jones (a writer whom I have definite distaste for) apparently made a similar argument in his book Living Machines.

That selfish materialism dominates the culture of Europe, Asia, Canada and New Zealand there can be no doubt. David D. Kirkpatrick shows people in those nations to be obsessed with individual choice to the complete exclusion of tradition or morality. They wish to have the highest-quality and most individual records and books in a manner that serves, if you will, to build bigger and bigger egos and leave no room for relationships. (Those on welfare tend to be even more materialistic in this way, as Arthur Brooks shows).

For the majority who are not autistic or otherwise lacking empathy, such a culture and lieftstyle is extremely repellant. Like a magnet, even modestly empathetic people are lured to Melbourne's sprawling suburbs, and want conditions under which their way of life is not threatened. Buckley does not consider that sustainable development in Australia would require a severe effort both