Thoughts on riding from Belgrave to Pakenham 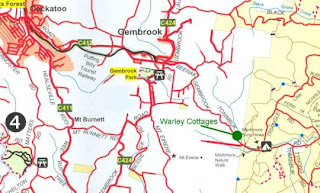 Today I set myself a challenge I had desired for a long time: to ride by myself in the ranges east of Belgrave Station - which I felt would provide some sort of challenge for me and maybe even help myself to improve my grossly obese body mass.

I had hoped that I would be able to travel to Belgrave earlier when the weather was much better, but it was only today, on a day hotter than average for November but the coolest day for many weeks ahead it seems, that I got out of the house early enough to be able to take a train to Belgrave at a reasonable hour.

Unfortunately, I forgot to take my water bottle, which I certainly would have needed on a day of 25˚C with blazing sunshine - and I knew it was to become hotter and hotter all through the remainder of the month. I bought two discounted bottles of Diet Coke, but as my mother and dentist had told me, the drink could not quench my thirst at all adequately. the train trip to Belgrave was trouble-free and there was little problem with my behaviour: accostings of other people, whilst not completely absent, were much fewer than normal. However, once I began cycling on the road to Gembrook with the expectation I might be able to go even beyond Gembrook towards Tonimbuk and the 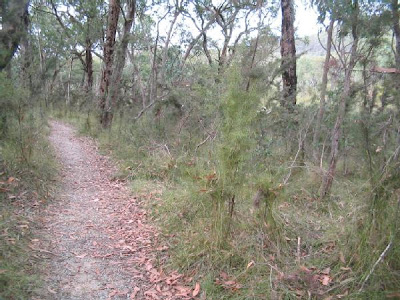 Black Snake Range, I realised that I was not well-prepared. I was having to push my bike on the side of the road except on downhill stretches, and took over two hours to travel the eleven kilometres from Belgrave to Emerald.

The striking thing, though, was how much safer I felt on the road than I ever have riding suburban laneways! In the entire ride, I never failed to hear a vehicle coming in either direction and consequently could always stay far off the road to avoid being hit. That I was never in danger is the more remarkable when one considers that the whole road was listed as a 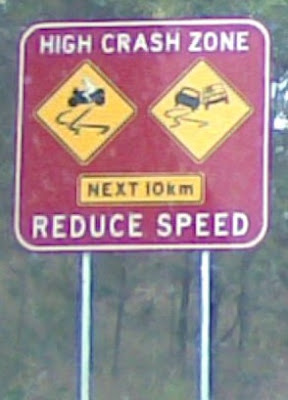 blackspot zone for people on bicycles! It does reveal, as I have been studying lately, the influence of an environment as quiet as the Dandenongs - which I can tell you is by no means as far towards a silent environment as one can go.

During the trip towards Gembrook, I stopped at Emerald Library for an hour to refresh myself, after having a donut and cream lamington at the local bakery. I then went onto Cockatoo, but when I realised I was only halfway to Pakenham I felt it would be a ridiculous idea to follow my original plan to reach Gembrook and beyond. Thus, without hesitation, I turned my bike towards Pakenham. It was an easier, mostly downhill, ride to Pakenham, but it took longer to find the station than I expected. Worse than that, by the time I reached the station I was so tired that I fell asleep on the train - even with my iPod in my ears! It was also hard to keep the bike stable on the train. Moreover, when I reached the city and transferred to a train to Rushall Station (so that I would be mostly riding downhill instead of uphill) I found that I had strained myself in the chest region and was worried about how difficult it would be to ride even from Rushall to my home in Carlton. When I did reach home, I was so tired that - very unusually for me - I went straight to bed after having a bit of fruit to eat.

All in all, I feel as though I do want to repeat the trip - even though the climate is changing so fast that it will be from now on very hard to do this sort of cycling outside of a short period in the winter and I will have to wait until long after returning home from Europe for weather cool enough to try it again!
on Friday, November 06, 2009