Cricketers Who Missed Out: 1913

In an earlier post, I pointed out how there were no Wisden Cricketers of the Year for 1913, 1921 and 1926 due to special portraits of single individuals.

Now, I will look at who would have been the Five Cricketers of the Year but for the special portrait of John Wisden in the 1913 Almanac. To do this, we must study the 1912 English season and consider who achieved most during the season but had not been chosen up to that point.

Owing to a dispute over the selection of Frank Laver as manager, Trumper, Armstrong, Ransford, Hill, Carter and Cotter would not tour. A seventh player, the great leg-spinner H.V. Hordern, Australia’s only effective bowler in the 1911/1912 Ashes series, was doing medical studies and could not come to England. These losses left Australia with not far above a second-string team that a relative of mine said was the weakest Australian team of the twentieth century apart from the 1985 side affected by the defection of bowling spearhead Terry Alderman to South Africa. Nonetheless, Australia did not fare badly in the Tests, losing only the last one to England, but four losses at the hands of English counties showed that the team was not of the same quality as previous ones. The loss of Armstrong and Hordern was felt worst in the disastrously wet summer: both would probably have averaged as low as Reggie Schwarz in 1907 had they toured, but as it was none of Australia’s bowlers averaged under fifteen. More than that, the loss of Ransford left Australia short of their best batsman on the previous 1909 tour, which was also played in an dreadfully wet summer.

South Africa suffered from the loss of form of Vogler and Schwarz, which meant that their bowling was very limited, and a general shortage of class batting, whereby none of their batsmen could reach international standard. As a result, they were almost helpless against Barnes in the Tests. They did have two wonderful bowlers in 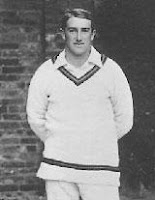 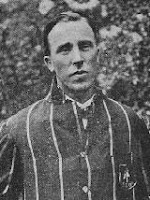 Sid Pegler, the former of whom was also their most successful batsman. Pegler was the last touring bowler to be leading first-class wicket-taker, falling eleven short of two hundred first-class wickets for the season.

In county cricket:
Overall, there would be probably seven players who would stand a chance of having been a Cricketer of the Year in 1913. Certainties would have been:
All these players were dominant both at first-class and Test level, and Dean’s inclusion would have been further favoured by the manner in which he had bowled so well for Lancashire in 1911 when he was leading wicket-taker.

Faulkner, widely regarded as the best player before World War II to miss out on Cricketer of the Year honours, had done very well in 1907. He was the team’s best batsman, generally hitting freely but against Lancashire showing he could play a very stern game, and in one Test bowled with deadly skill on a difficult pitch. During the disappointing tour of Australia in 1910/1911, he played some really brilliant innings including a Test double hundred in Melbourne. Despite (or perhaps even because of) exceptional rain in southeastern Australia that summer, the wickets were seen as even more perfect than usual, and Faulkner did nothing with the ball. Nevertheless, with the absence of Vogler and decline of Schwarz, Aubrey Faulkner became the focal point of South Africa in 1912. He batted very well except in the six Tests where he made only one score over 25, and his leg spin bowling lost none of its skill from 1912. With 163 wickets, he was the third highest wicket-taker of the year.

After 1912, Faulkner was not to play any more first-class cricket in South Africa, but so weak was South Africa’s bowling on their next English tour that the team called him on to play one Test. He nearly got Hobbs stumped – and was praised in Wisden for this – but did not take an actual wicket and played no more, committing suicide at forty-eight.

Pegler, a medium pace bowler relying on the leg-cutter but with a dangerous faster ball and another variation in the form of a ball that turned from the off, was the surprise packet of the tour. He had shown some promise on the disappointing Australian tour of 1910/1911, as a tail-end slogger as well as a bowler, but nobody was prepared for what he achieved in 1912. Pegler had so few breaks he played thirty-four of the thirty-seven first-class games of the tour, being rested only for one match against Cambridge University, but suited by the prevailing sticky wickets, was amazingly consistent from the time of his first great performance against the Marylebone Club except during the brief July dry spell. Although he did not take more than eleven wickets in any one match, he took wickets in every game and at the end of the season had only one bad match against the brilliant Lancashire batting. In addition to his spin and faster ball Pegler brought the ball over from such a height that on the treacherous pitches of 1912 he was very awkward indeed.

Because of his work as a commissioner in Nyasaland, Pegler played only one more game in South Africa the following winter. His loss proved a major blow to South African cricket which did not recover until the late 1920s. Pegler did play a full season with the 1924 South Africans when – though he lacked the dangerous fast ball of old – he was much more difficult than anyone else on turf pitches. 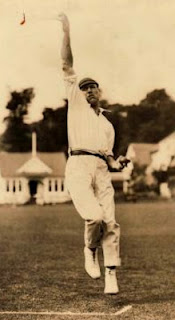 Dean, in contrast to Faulkner and Pegler, had been a major force in county cricket for half a decade. He was a left handed bowler who varied between fast medium swingers and slower spinners, in both styles having exceptional accuracy and a very easy action perfect for the role of a stock bowler. In his first two years Dean was seen as lacking in resource when pitches were unaffected by rain, but his swinging style offset this problem and by 1908 was when Walter Brearley was on business the mainstay of Lancashire’s attack unless the wicket was sticky enough for Huddleston.

Despite the reduced frequency of Brearley’s appearances, Dean improved every year and 1911, the driest and hottest English summer known up to the 1970s, saw Dean take 23 more wickets than any of his rivals and devote more energy to spin rather than swing – with great effect on the few occasions weather gave him opportunity and excellent reward even elsewhere.

Focusing exclusively on spin bowling for 1912 and with Colin Blythe refusing to be considered for representative calls, his superb 1911 record meant Dean was viewed the natural replacement. He proved himself the ideal contrast for the incomparable Sydney Barnes, and reached his highest point winning the last match of the Triangular Tournament. For Lancashire, Dean bowled consistently well in the shocking weather of 1912, being almost unplayable when pitches helped him and steady even in dry conditions as against Essex at Leyton where he conceded only 34 runs in 186 deliveries. In the Tests Dean was consistently effective, with his best performance being four for 19 at the Oval to win the Triangular Tournament before continuous general rain halted all cricket for two and a half days and one Sunday.

Dean never reproduced his best form of 1912, largely due to injuries. He did, however, take seventeen wickets in a non-Championship match against Yorkshire in 1913.

In considering the remaining two places for 1913, Roger Page suggested that had Wisden not done its fiftieth edition portrait, it would have chosen from each of the three countries competing for the Triangular Tournament. This is problematic because apart from chief batsmen Bardsley, Macartney and Kelleway, Australia had nobody who did anything to rival Faulkner, Pegler or the best Englishmen. Moreover, Bardsley was ineligible through being chosen in 1910. As for Kelleway, though he hit two Test centuries, his average of 25 makes it questionable whether he did enough outside the Tests to justify being chosen. The choice of Macartney would have made him ineligible when actually chosen in 1922, which would have no doubt allowed Arthur Mailey, attacking leg-spinner and brilliant fieldsman, to have been chosen. Kelleway would have had no later opportunity since he never toured again.

Other English players with a chance for nomination were:
All in all, I would have predicted Faulkner, Pegler, Dean, Jack Sharp and Charlie Macartney to have been chosen, which would have made Arthur Mailey a certainty in 1922. Mailey, in fact, I would place ahead of Jeff Thomson as the finest Australian since 1900 never to be chosen as a Cricketer of the Year: his all-attack leg spin bowling won the 1920/1921 Test series and he was at point about the best fielder in the game during the 1920s.

If there had been no obligation to choose an Australian, Greswell would probably have got in.

Jack Sharp, born on 15 February 1878 in Herefordshire, began his career for Lancashire as a left arm pace bowler and back-up to notorious chucker Arthur Mold. Aided by some very fiery Old Trafford pitches in May, he took 112 wickets in 1901, but from 1902 his bowling declined extremely rapidly as he developed his batting – which had already been useful in 1900 and 1901. He could hit hard and well all round the wicket, but his lack of technical flaws was equally apparent: he reached a thousand runs for the first time in 1905 and by 1908 was second only to Johnny Tyldesley as a Lancashire batsman. In the wet summer of 1909 Sharp was chosen for the last three Tests and played an impressive innings of 105 at the Oval against the tearaway pace of Albert Cotter, but did little in his two other appearances. Nevertheless, in 1912 Sharp, though no longer good enough for England, rose to his highest point in county cricket, averaging 48 for Lancashire in a summer of shocking weather, including an innings of 211 against Leicestershire. His batting was orthodox but complete, but in 1913 despite drier weather his average halved and, playing as an amateur after World War II, Sharp never recovered his best form. He missed most of 1922 due to business but captained Lancashire in his last three seasons from 1923 to 1925, but averages in the low twenties demonstrate definite loss of skill.
on Monday, April 23, 2012