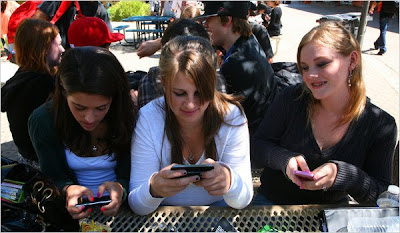 Over a week ago, the New York Times wrote an article about how electronic media effects the way people work, titled “Growing Up Digital, Wired for Destruction’. Although I forgot to look through my Google Reader blog or Front Porch Republic, even before I read it I felt a great deal of connection to what the Times appeared to be saying.

Researchers say the lure of these technologies, while it affects adults too, is particularly powerful for young people. The risk, they say, is that developing brains can become more easily habituated than adult brains to constantly switching tasks — and less able to sustain attention.

Recent times, in which I myself have read fewer print books and relied more on Internet websites and what few journal articles are available to me as a non-student, give a remarkable sense that article author Matt Richtel is most definitely correct. When I was reading more print books or (very old) articles from print journals, I was writing more and more able to concentrate on the vast number of long-term projects I once wrote.

Though I still had a tendency to read and read books in bookshops to the point that they were obsessions, I do very firmly believe that I wrote more and had a much better rhythm than I do now. Especially in Victoria's recent hot and humid weather, I have rarely had enough sleep to get up seriously before 12:00, and whenever Mummy is not around I often do not get into the shower before 13:00. Even in the two years after leaving RMIT for assaulting a security guard, I was much better on these issues whilst I was buying more print books on eBay. In these two years I did often get up around 10:00, and generally slept better even during ordinary sleeping hours. I also did not do irresponsible things like staying up naked and not getting into the shower after taking off my pyjamas at midday - which of course I do not do when Mummy's around!
on Thursday, December 02, 2010