Thursday was our last day in Hong Kong before returning for another week in Singapore. Although Hong Kong usually has warm but not horrible winters, a strong Siberian High was driving very cold air into the East Asian outer tropics. I had prepared for weather slightly hotter or similar to the delightful winters of southern Australia, but in fact the weather in Hong Kong this Thursday was not only very cool, but also (as is typical for southern China) extremely gloomy with low-level fog. The low-level pollution problems of the region are exacerbated by the fact that the superabundant labour supply has encouraged extremely intensive industrialisation.

The chilly weather - I was really surprised to find it was only 11˚C which is about the average maximum of a Tasmanian winter - meant that my brother decided that we would not go on the long trips of the previous day. Instead, we went to the Hong Kong Museum, which was a fascinating trip through the history of this small, mountainous city-state. There were some details new to me, especially regarding the Yue people who lived in Hong Kong before the Qín Dynasty unified China for the first time, and of groups of Chinese who were almost completely based in small water craft around Hong Kong and only set foot on land to trade for essential supplies.

There was also some fascinating information on how Hong Kong came to look the way it does from the high mountain views I had seen on Tuesday and Wednesday; revealing how the terrain and rocks of Hong Kong were formed by Paleozoic orogeny and Mesozoic volcanism. It even went into details of how Hong Kong’s climate has changed over time; though with a brief exception during an arid period of the Mesozoic it has generally been remarkably stable over long geological periods, and showed the subtropical rainforest that would cover Hong Kong in the absence of the disturbances that has degraded or removed the whole territory’s natural vegetation.

The last and most interesting part of our museum trip looked at colonial Hong Kong, and it revealed how a deadly trade in opium and China’s extremely xenophobic cultural attitudes allowed the British to take over Hong Kong and use it as a trading port. Under British rule, Hong Kong developed rapidly, and one of the best aspects of our museum trip was that we were able to actually look at how life in Hong Kong changed during the 1960s and 1970s as new conveniences were developed as a result of vast private sector investment in the city-state, which has mistakenly led to Hong Kong being seen by the Politically Incorrect Guides as a model for development in very poor nations with no natural inorganic resources. There was also some very good information on how Hong Kong actually evolved politically during its period under British rule, and how it has continued to evolve since being handed back to China. It was surprising to note that modern income taxes developed so early in Hong Kong.
After leaving the museum, I had a look at an interesting travel book about major destinations for travel, and about the history of Hong Kong - which seemed interesting but which I never read more than a few pages of. Next, I had a minor accident whereby I hurt my head trying to sit down, but after that we went to look at Hong Kong’s vast, super-dense business centres and in the process I had an excellent Italian meal that did not even remind myself of what I often eat at home. After this, we had a look through Hong Kong’s shopping stalls for a USB port for myself (the one I have only allowing 500 MB of memory) and for clothes for my mother. The clothes in Hong Kong are generally much too small for Australians, so it is not surprising that we did not buy anything.
To finish our last full day in Hong Kong, we returned to the hotel and had a relatively relaxing evening in our hotel room. The stay, which we completed with a brief look around the city on Friday 6 January, was one of the best travelling memories I have had since Kyōto and Mount Fuji at the end of 2009. The highlight of Friday was viewing towards China, which I love to call following Tony Cliff the SCDC for “State Capitalist Dictatorship of China”, as shown below: 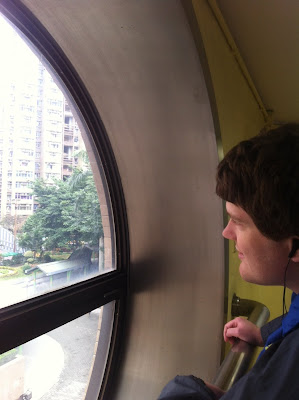