A couple of days ago, the left-wing publication Mother Jones published a list of the major conspiracy theories about Barack Obama, many of which are patently absurd, and divided them into five groups: 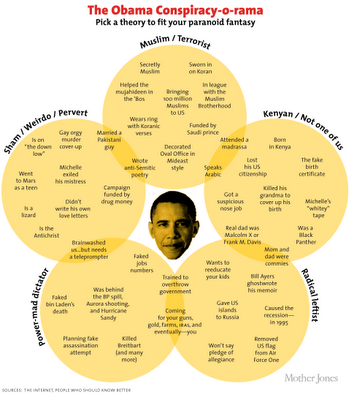 These theories, for the most part, are quite familiar to me after years of reading books like the Politically Incorrect Guides. The theories that Obama is a Muslim are ridiculous, although it may be true that he is far harder on Christianity than on Islam in his policy because Islam is not as concerned with natural law. However, Sharica law is so much at variance with what Obama and the Democratic Party aim to do that at best, the Democratic Party and Islam are “strange bedfellows” who unite loosely only because they have the same enemy in traditional Christianity. It is true that his stepfather Lolo Soetoro is a Muslim, but Obama was a UCC member until 2008.

The second and fifth theories are so ridiculous I will not spend much time on them, even if the detailed research that has gone into Obama since he became President does not exclude the fact that his father Barack senior was part of the anti-colonial movement in East Africa. Obama was born in Hawaii but grew up in Seattle and Indonesia and ultimately finished at Columbia University in New York. He never lived in Africa.

The fourth theory is also ridiculous. Even if Obama does want to restrict religious freedom (which moderates and liberals will deny), he is not deliberately faking such ideas.

The notion that Obama is a radical leftist who wants to transform the United States into a state resembling the struggling welfare states of Eurasia, Canada and New Zealand has more substance. By their nature of having glaciers and orogeny destroy lithophile minerals, Enriched World lands have a small potential tax base, and thus are likely to suffer a great deal from high taxes. Thus, the large welfare state Obama has tried to build is likely to become a financial liability and calls for its reform are reasonable. However, as the picture above shows, Obama haters do go much further than reason even here. Most especially, I have never heard in his four years as President that he wants to give US islands to Russia: and in an industrial society the only islands somebody could conceivably talk about in these terms - the Aleutian Islands - contain nothing of economic value whatsoever.
on Monday, November 05, 2012