A trade we need everywhere if it’s not come yet 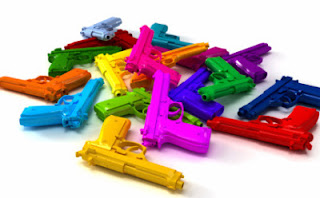 Tonight, as I wait for a reprint 1910 Wisden to see if it ends, I have found an article that recalls my earliest days at Raleigh Street in a very nasty manner - and shows what has to be done.

Circa 1990 at Raleigh Street, a fellow student of mine (if I recall well several) said to me that they had a real gun when playing with a toy gun like those shown above. Although one might imagine the story to be a joke, this always taught me to fear the possibility kids would acquire a real gun and use it to shoot me. When kids said as I reached adulthood “I’ll (expletive) kill you” and “I’m gonna shoot you, (expletive)” I stood in great fear believing that many kids wanted me dead.

Although with age I can admit that it was my errant behaviour rather than hating me personally that caused kids to tease me so much, that does not mean I believe teasing as I suffered can be justified.

In this context, a trade by Strobridge Elementary School of books and bikes for kids’ existing toy guns is most refreshing and original. Each child will get a book in exchange and enter a raffle to win a bicycle. The idea actually came from a photographer called Horace Gibson, who takes students’ school pictures and expressed concern about a spate of shootings of young people by police in Oakland. Police, Horace Gibson says, often mistake toy guns for a real gun, despite the special colourings in the picture at the top.

It would be great if toy guns were replaced in this way at all schools in Australia, at least if schools are willing to do more than my school was about children acquiring toy guns which could give them a taste for real guns without understanding of when and how real guns can be used safely. I have never read about the effect of toy guns on whether kids become bullies or something much worse (like killers) but unless it can be shown that toy guns really help kids avoid violence with real guns (very unlikely I imagine) i would never let a child in my care have a toy gun!
on Sunday, June 16, 2013