A forgotten failure from 1984

In the history of Australian sport, there is one famous case of lights failing during a match, caused by car hitting a power pole:

What surprised me is to find a case where lights had failed twelve years earlier in a rugby league game between Balmain and Eastern Suburbs. Unlike the St. Kilda versus Essendon game from 1996, after twenty-one minutes the players went back onto the SCG and played out the game: 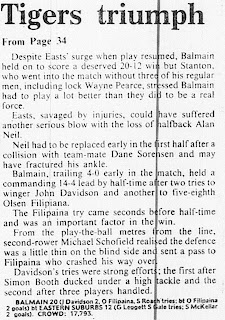 It was, as often occurs during Sydney’s extremely erratic rainstorms, proposed to completely replay the game, even though that would have been hardly fair to a Balmain team that was leading by three tries to one and sixteen points to four.

In the end, despite a reasonable Rooster comeback, the final score was twenty points to twelve and the game was finished by 20:30 on the scheduled night.

Floodlight failures are by no means incredible rarities: there have been several in recent years in English soccer, including one involving the world’s second richest sporting team - Manchester United.