Another case of biting ears - this time from union

Ever since my brother back in 1990 - or was it 1989 as I only know it was a Canterbury versus Eastern Suburbs match - I have laughed at the claim that the object of rugby football is to bite people’s ears off!

My brother gained that impression from seeing rugby forwards seem to run into each other without an effort to dodge, as I have previously noted - though it’s more sensible to think that dodging in the dense “traffic”of the centre of a rugby field is not as easy as he would like to believe! He thought that when they hit each other the player with the ball would try to get his teeth around the opponents ear as if they were involved in a genuine combat sport.

It’s strange then that my first instance of biting ears in rugby came in a scrum - and so does my second! This time it’s from rugby union at a time when that code was still officially strictly amateur, though dual internationals like Ricky Stuart admitted it was shamateur and that union players before the Super League war put paid to ideals of amateurism did get renumeration. The ear-biter here was South African front rower Johann le Roux against All Black hooker and captain Sean Fitzpatrick. After a scrum had broken up, the two remained on the ground when le Roux bit. 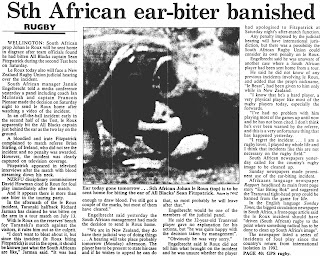 There was apparently a lot of complaint about the general play of the Springboks in the short period between the end of apartheid and the end of official amateurism in rugby union.

Nonetheless, my late father would have been much more surprised at biting ears in rugby union than in rugby league, which he viewed as much more a “game for thugs” than union, probably owing to the fact that rugby league was the game of the working classes and union that of the upper classes. Even my brother when a child thought that rugby union was less violent and repetitive than league, though I found it much harder to understand because of the “loose mauls” which seemed senseless compared to the play-the-balls of league.

Vis-à-vis league, I (consequently) know almost nothing of the safety record of rugby union, but that does not mean I cannot say that many of the same principles must apply compared to genuinely violent sports like gridiron or ice hockey. It is possible that anger over the collapse of apartheid and the continuous protests that caused it may have affected the way South African rugby union teams played in the first half of the 1990s. It is also possible that anger at not being able to play for so long due to apartheid-related boycotts instilled a sense of determination to the point of aggression in these Springbok teams. I have not read anything to assess these arguments, regardless of their plausibility.
on Monday, July 08, 2013