The Murray must go to Adelaide

In the State Library yesterday, I read of
Adelaide's water from the Murray running critically low, with supposedly on 47 days supply left. It is saying Adelaide will have to rely entirely on Hills storages if the Murray runs lower. As experience in 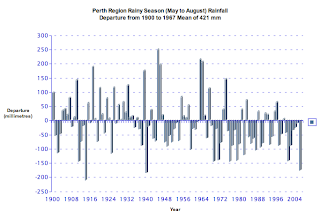 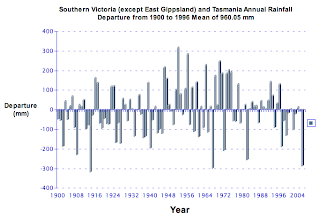 As I see it, rather than, according to Floods, Famines and Emperors page xvi "muddling its way from crisis to crisis", Australia has to take swift, decisive action to avert catatrophic shortanges of water. The first step, even given political limitations, has got to be eliminating irrigation on the River Murray and handing over its entire flow to Adelaide and the wetlands at its mouth.

Climate change forecasts predict at present rates of warming elimination by 2050 of snow cover on the Snowy Mountains and declines in rainfall over southern Australia of up to 70 percent by 2070. With that scenario, even short-lived flows on the Murray would become exceedingly rare and Adelaide would fight with irrigators in the upper Darling for that river's extremely erratic flow which in bad rainfall years is unlikely to quench Adelaide's thirst.

If we completely eliminate irrigation from the River Murray and tributaries, Adelaide would have a chance to maintain some water supply in a drying climate. Revegetation of farmland in the Murray Basin with mallee and heathland gives Australia an opportunity to cut its greenhouse gas emissions - is the only way it can avert the possibility of climate catatrophe. I hope to see efforts to protect much of southern's Australia's farmland as national parks before it is destroyed by global warming, and to see revegetation as a decisive step away from the muddling that has dominated policy since the Lonie Report.
on Sunday, March 23, 2008