An anniversary, a joke, and a recollection

One thing I felt I should do as a result of the forty-ninth anniversary of the death of the third highest wicket-taker in first-class cricket and the seventy-fifth anniversary of his being the last cricketer to reach three thousand first-class wickets, I should do something I think about all the time ever since I asked the owner of Dead or Alive about the name “Charlie Parker”.

One of my most memorable recollections of Essendon Grammar at East Keilor was looking up a primitive Encyclopedia called Grolier. It had three search methods:
One fond memory is looking up a combination of “surgeons” and “masks”, which gave no entry on Grolier, though there were 20 for "surgeons". “Surgeon” and “mask” gave one entry under Surgery, which said: “the surgeon in gown and gauze mask came to epitomise medicine by the middle of the twentieth century”. At the time I devoured Grolier, I was obsessed with why surgeons wore masks and how it would feel to wear a surgical mask. Akin to many Christian sects and religious orders, surgical dress seemed and seems so different form the tight, casual dress I have always worn that a fascination is natural.

My brother once wrote an article titled Surgery that said “Surgeons wear masks” 512 times in succession!! I knew it could not be a proper article, but I still laughed.

Also on the Grolier, I searched for the old English bowlers I had then (circa 1993) become obsessed with. I could not find articles for any of them, but found something under “Parker, Charlie”. However, it was not the Gloucestershire spin bowler that Grolier was listing, but a jazz musician of the 1940s. Ever since then, I have felt as though I should joke to people about who Charlie Parker is, because even in Australia Charlie Parker the jazz musician is much better known than Charlie Parker the Gloucestershire cricketer. 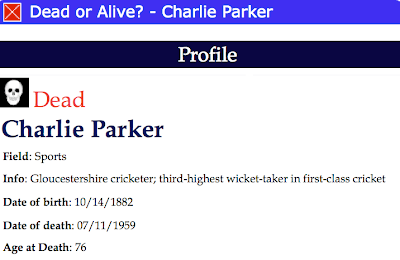 Nonetheless, the name “Charlie Parker” has ever since been my favourite one for trying to trick people. I imagine often that I would do it in an e-mail, for instance I have though of doing so in discussing my views on Robert P. Murphy's claim that “pro sports salaries are fair, astronomical as they are”, where I understand his view but believe he has overlooked important points. Moreover, I still get a laugh out of imaging a file like the one above actually on Dead or Alive even though I know it never could be placed on it because almost nobody in Australia, let alone the US, is that interested in old county cricket.
on Tuesday, July 15, 2008