Re-acquainted with an old favourite site

When I first was on the Internet, one of my very favourite sites was Dead or Alive. I loved to find out about whether people I knew were dead or alive, but I was frustrated by the fact that so many people whom I knew were not included either because they were unknown in America (like Herbert Sutcliffe) or who are only famous in fields that have attracted my fixation, like Robert Christgau.

I have often imagined what sites for some people whom I have taken an interest in would be like (I actually asked the site owner if Mary Daly was dead back in 2002!) 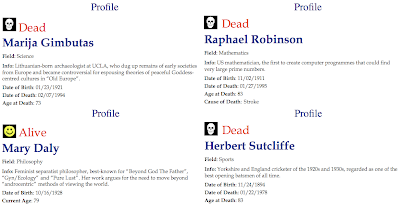 In an age of such rapid change, I find it pleasant how little has changed about the outline of Dead or Alive. The fact that the site has not added people I suggested I have grown in acceptance of because I - perhaps through reading astrology sites appreciate that people in entertainment are much more famous than those in the specialised fields that have always (and still) capture my interest.
on Saturday, July 05, 2008