When I first read music criticism, I became acquianted with some anti-rock writers whose ludicrousness is so laughable I do not know how I recalled it. Either Socialist Alternative or books published by Regnery are models of calm and balance by comparison to people like David Nobel, Jacob Aranza and Jeff Godwin.

One well-known theory dating from the late 1970s is that the song "Hotel California" is about the Church of Satan. Although most music writers dismiss this claim, I have never heard it refuted. However, the fact that these critics claim an Eagles song called "Have A Good Day in Hell" exists when a check of All Music reveals no such song shows they cannot be serious.

However, the absurdity of anti-rock writers can be better seen in the story about the 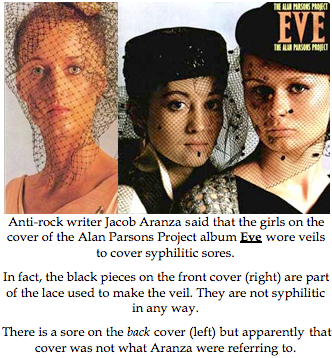 Alan Parsons Project album Eve. The story goes that the girls on the cover had syphilis and the lace veils used on the cover were there so that the syphilitic sores would not be visible.

There are so many problems with Aranza's idea, but I will point out the following:

2) I did once search for the "offending" cover and could never see anything resembling Aranza's description.

3) Today, when I recalled reading this story and told it to him, my brother said the girls might have worn veils because they were nuns! Whilst I find the lives of nuns extremely fascinating, it was impossible to believe this story because I know religious orders do not accept girls as young as I assumed those on the cover were - and in any case it takes years of postulantship before a nun takes the veil.

4) My mother told me syphilitic sores occur around the genitals yet a veil is worn around the head!

5) When I looked at the Alan Parsons Project on All Music, I found the cover of Eve and realised it must have been the one viewed as "offending" Christianity.

6) The figures on the cover of Eve did not look any younger than fifteen.

7) The supposed "syphilitic sores" on the front cover extend beyond the faces of the girls (or women) on the cover. My brother pointed out that would mean syphilis would extend across the air between the two figures - which is impossible since syphilitic sores develops only on someone's skin.

The evidence above clearly indicate that the veils cannot have been worn to cover syphilitic sores. I wonder how many others have come to the same conclusion?
on Sunday, September 21, 2008

it's not a sore on the back cover - it's a flower! there is another one on the hat.