Death of the Javan rhino?

In today's Jakarta Post (see the description here because I could not obtain accurate data from the paper) there is a description of the rainforest habitat of the critically endangered Javan Rhinoceros (Rhinoceros sondaicus) drying out because of weed invasion and global warming.

Whilst I accept that weed invasion is one of the most dangerous threats to wildlife throughout the world and that means of making far more attention paid to it are 100 percent desirable, the point made about climate change is hardly right. Even though an expanding tropical (monsoon) belt may shift the Intertropical Convergence Zone away from the equator, it is unlikely that rainfall in most of Java would be affected. Moreover, 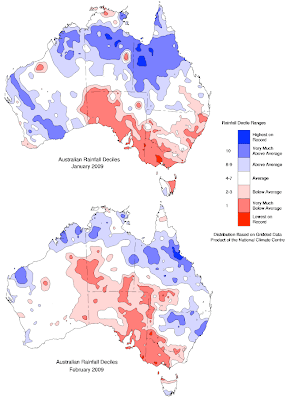 rainfall data from this year's super-monsoon do not suggest the equatorial regions will lose rainfall even as the edges of the monsoon belt become massively wetter. A larger area occupied by the Intertropical Convergence Zone is exactly what the "tropical expansion" that has desiccated southern Australia in the past thirteen years and will desiccate Tasmania within a decade or so would constitute.

It may be that climate models suggest the equatorial regions' climates will turn into something like East Africa with a bimodal rainfall regime and two short or fairly short dry seasons every year. The problem is that the uniqueness of East Africa is as much a function of its topography creating, as in Sri Lanka, Vietnam and the Brazilian zona da mata, a climate in which rain comes from a "retreating monsoon" in the autumn. Rain shadows like that simply do not operate over the so-called "Maritime Continent" nor over most of South America.
on Tuesday, August 25, 2009