This July, August and September the 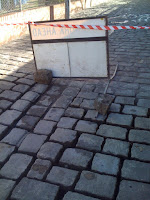 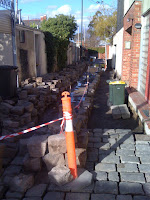 At first I though that the laneway might actually be being turned into a tar road - whcih I feel would be a genuine pity. It is actually being -resurfaced to make it less rough - my mother told me to recall my now-deceased father and how it was impossible to push his wheelchair westwards when we were taking him for an occasional trip from the nursing home in Balwyn where he lived for the last year and a half of his life.

The rebuilding of the laneway has been delayed by frequent heavy showers during most working days for the past month - curiously at a time when the weekends have been fine yet delightfully cool. The laneway has been grouted from its western end to the end of the swimming pool fence, but grouting to beyond my house was scheduled to have been done a week ago but has not been done yet owing to frequent showers during the working week. I have come to realise that this roadwork can only be done when the laneway is totally dry, so that even the sunny periods have not until today dried the moisture at the surface of the laneway sufficiently for grouting.

For me, it has been a little annoying because on one really wet afternoon I had to carry my bike through a huge pool of water. My mother said that the water was up to her knees when she came home that afternoon - at times I fear for the critical paper notes she carries every day from school!
on Friday, August 28, 2009