Why international condemnation of Australia is hope for the planet

Hearing of a ridiculous debate on GOLD-FM about whether the government should:
had made me wish to draw attention to the critical issue of how Australia’s exceptionally bad greenhouse gas emissions must be the initial target of every international environmental treaty.

Australia has the highest per capita greenhouse gas emissions in the world, yet has the fourth highest biodiversity of any country in the world according to the Encyclopedia of Biodiversity. 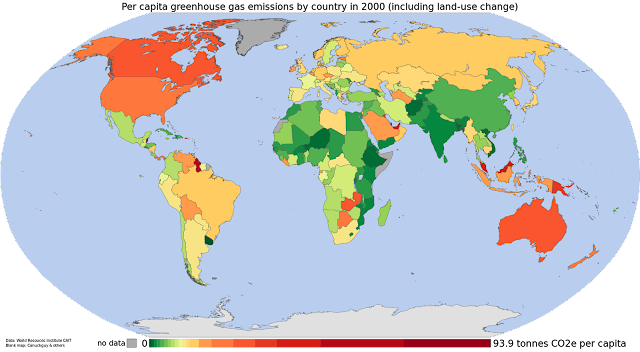 At the same time, Australia has probably the lowest average terrestrial and marine secondary productivity (that is, animal biomass per unit of land or water volume) of any country – let alone continent – in the world. Combined these imply that conservation of Australia’s exceptionally ancient and infertile landscapes should be one of the highest priorities for the international environmental movement. Even species listed as “Least Concern” due to “having an extremely large range” by the IUCN need to be considered carefully because home ranges for species in Australia can be more than 1 km2 in most of the continent as against many pairs per hectare in the Enriched World.

More than that, Australia’s large mineral resources give its governments a refused opportunity to pay for conservation of areas of land that Enriched World nations like the United States would struggle to do – especially were it to charge entry fees to visitors who might acquire appreciation of how different the behaviour of Australia’s flora and fauna is from animals native to the northern and western hemispheres.

In this context, the building of freeways – or even maintenance thereof – by any government in Australia is despicable. Australia has no need for these roads: they are a primary source of increased traffic congestion and financial losses for railways – to which Australia’s flatness and fragility makes it quite uniquely suited among the continents. Building of freeways is nothing more or less than the same policies that Australia’s governments have adopted to disastrous effect for the past eighty years, with very bad environmental consequences for the species-rich southwest and no reduction in traffic congestion. No doubt freeway building is viewed as convenient for outer-suburban families who desire privacy, but this “heart drain” from the Enriched World is unsustainable given Australia’s inherently low productivity in both food and water.

In a recent paper ‘Green Light for Green Agricultural Policies? An Analysis at Regional and Global Scales’, Wolfgang Britz, Thomas W. Hertel and Janine Pelikan show how local conservation in the exceptionally low-biodiversity European Union has the effect of potentially increasing cropland in the high-fragility Unenriched World by minimally 716 km2. This figure is small, but a more rigorous elimination of EU farm subsidies would increase cropland in the Unenriched World by between 3,000 and 4,000 km2. Eliminating East Asian farm subsidies would probably push this figure above 10,000 km2 of extremely marginal land which stores a large amount of carbon in its native flora (adapted to negligible high- and medium-grade phosphorus). That figure is for a useful comparison about equivalent to converting the entire protected area of southwestern Australia – already plagued by a linear 1.1 percent rainfall decline per annum since 1967 – to cropland.

Since it is that sort of land that would be converted under these conditions, one wonders whether the Enriched World would be better spending the money it outlays on farm subsidies trying to condemn Australia and Southern Africa for their poor conservation records? The fact that sanctions by the international community helped bring down apartheid gives, in my view, some clues about how the Unenriched World should be treated for its very poor conservation record – at all events considering its high biodiversity and low productivity. If the Enriched World were firmly united, it could tackle Australia in particular very effectively if it argued (correctly) that Australia is very largely responsible for problems related to man-made climate change outside its borders. Demanding a rigid zero- or negative- (via revegetation in areas expected to become arid) greenhouse policy for Australia will do much more in the long term than all the regulations Eurasia and the Americas have put up at high cost for little gain.

With international condemnation – or even the threat of suing – Australia’s road and coal lobbies would come under pressure never known from very weak political protests or feeble posters seen at recent visits outside Carlton North Post Office. That would be hope for the planet’s survival like nothing else could be!
on Wednesday, May 08, 2013