Monthly and seasonal EWP versus CET graphs: July to December

Over the past few months, having studied the EWP and CET series that first interested me about fifteen years ago as a result of my long-term study of old county cricket, I have wanted to be able to plot EWP against CET to see patterns I first noted a year or so ago. These relate to the fact that because easterly continental air over the UK tends to have much greater seasonal variation in temperature, and to be much driest at all seasons, the relationship between rainfall and temperature over the UK is opposite in summer and winter: dry months tend to be hotter-than-normal in summer, but colder-than-normal in winter especially over western slopes.

In these next two posts I will give detailed plots of EWP versus CET for all months and seasons, and for the fiscal year from July to June, consequently updating details to October 2015, a month whose warmth shows Australian greenhouse gas emissions to be taking even firmer control of the climate. I will do them from July to June rather than by the calendar year, since owing to the greater variance in temperature during the northern hemisphere winter the problem of unusually cold or warm seasons being divided between two years is thereby minimised.

I originally intended one post, but will do the first half of the fiscal year in this post and then do January to June and a full fiscal year EWP versus CET graph later.

Graphs are done at intervals of 0.25˚C for the hotter half of the year from April to September and  0.5˚C for the cooler half from October to March to deal with larger mean temperature variance.

To clearly distinguish natural variability I will colour in a dark red all data points beyond 1974 when it became clear man-made greenhouse pollution was controlling the climate, a trend that intensified after the botched Kyōtō Protocol – whose absolutely first priority should have been an absolute and uncompromising zero-emissions target for Australia (both the most infertile and oldest continent, a feature that ought to demand exceedingly low per capita emissions, and the worst per-capita polluter) before any reductions in Europe, East Asia or the Americas were contemplated – untenably allowed the worst polluter the most lenient increase! 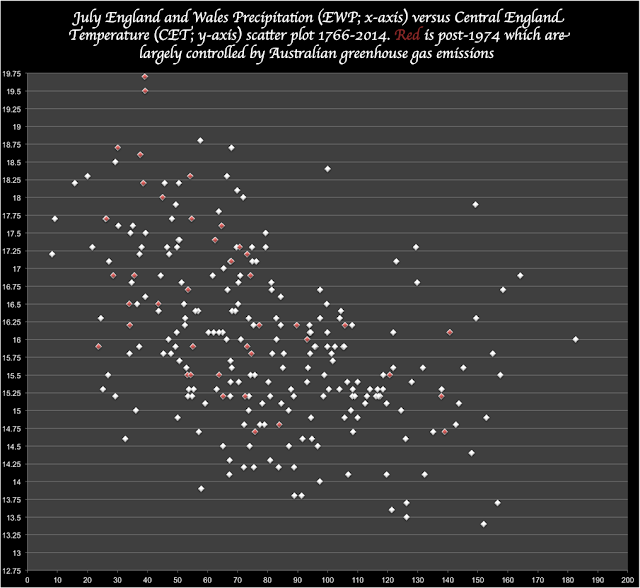 As we can see from this scatter plot, in July there is a general trend for drier months to be hotter-than-average. The effects of anthropogenic greenhouse pollution upon these trends is not large, since the red diamonds follow a similar type of pattern to the white ones, only the lower part (very cool Julys) is largely or completely absent.

The major outliers are the “hot-wet” Julys of 1779, 1828 and 1834, and the “cool-dry” Julys of 1913 (EWP 32.6 millimetres; CET 14.6˚C) and 1919 (EWP 57.9 millimetres; CET 13.9˚C). July 1919 was extremely dry in Northern Ireland – it is among the top twenty driest months there since 1910 – and clearly possessed a very striking block over Iceland. This Iceland block drew Arctic air over the UK, which was cooler than normal, but produced conditions settled enough for the UK to be unusually dry except in the east which was on the western side of a low pressure anomaly and most exposed to Arctic air:

July 1913 was a rare summer anticyclonic gloom month, hotter than average in northern Scandinavia but very cool in central continental Europe, and with sunshine not much better than the notorious summer of 1912. 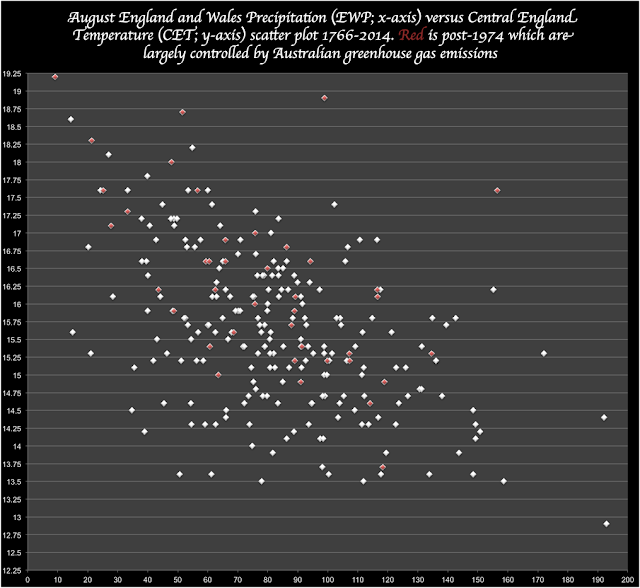 This graph is essentially similar to the one for July. We again see a tendency for hot Augusts to be dry, with that of 1995 hotter and drier than any before Australian greenhouse emissions began to control the climate (and perhaps along with the infamously cold but virtually snowless February 1895 the most purely “continental” month over the UK since 1766).

The notoriously cold and sunless August 1912 is an outlier at the opposite end – it was certainly duller than February 1891, 1907, 1949 or 2008, and possibly duller than Februaries 1887 and 1895 – whilst the anthropogenic August 2004 is a “hot-wet” outlier, as is the extremely hot and thundery August 1997, which actually had a strong pre-anthropogenic parallel in July 1808, a month well-known by historians for its violent thunderstorms and large hail. 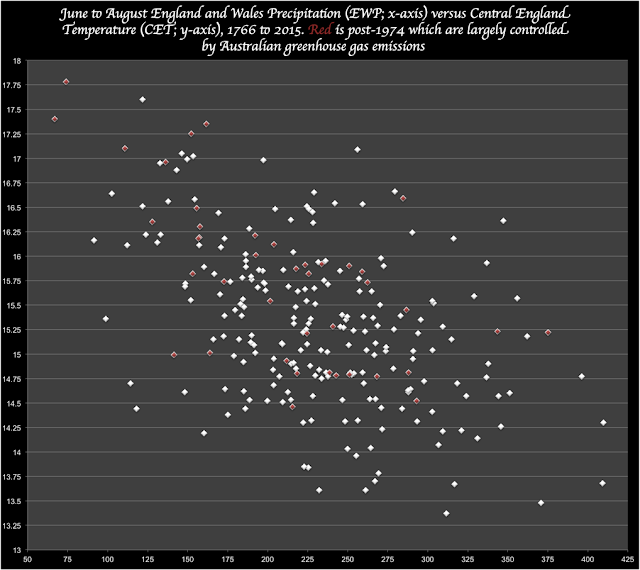 The summer scatter plot shows essentially the same trends as the July and August plots. The very hot and dry summers of 1976 and 1995 – though already distant as Australian mining and coal control of the climate intensifies – stand out very clearly, as does the hot, dry summer of 1826 when many wells dried up, an occurrence that similar dry summers since like 1870, 1921, 1933 and 1976 did not see.

If anything there are fewer outliers that for the individual summer months, with no real “hot-wet” outlier since Australian greenhouse emissions seized control of the global climate. The main outliers are the “cool-dry” summers of 1972 (EWP 160.3 millimetres; CET 14.19˚C), the above-mentioned 1913 (EWP 114.4 millimetres; CET 14.70˚C) and 1864 (EWP 118.1 millimetres; CET 14.44˚C). 1913 was notable for the worst Sahel drought between 1870 and 1970, and no doubt the midlatitude westerlies were pushed south allowing lower-than-normal pressure over Europe and a persistent block over the north Atlantic. 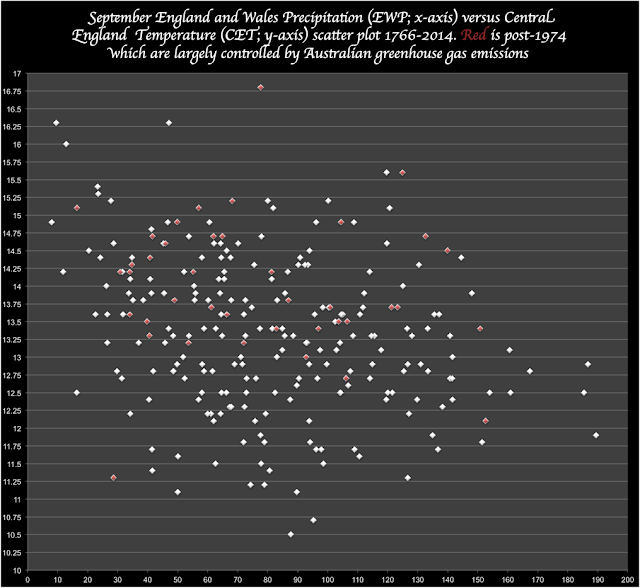 Here, we see the inverse correlation between England and Wales Precipitation and Central England Temperature of the hotter months weakening a little. The most notable case of this is the blocked northerly September 1986, which was extremely dry yet very cool. During September 1986 England had such lovely weather – sunny and a perfect 15˚C most days – one wonders why Englishmen moan about their weather until you realise it’s precisely because 90 percent of the world must have worse weather than England, with the result that English people either find the weather boring or are less tolerant of really bad weather! September 1986 is in many respects very similar to the more famous and very cold February of that year – completely blocked and also very wet over the United States. 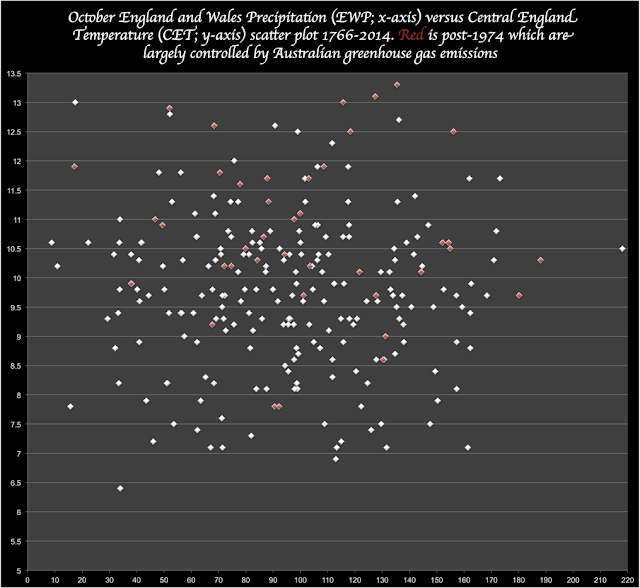 Here were see a transition to the winter season, as the line of best fit between EWP and CET is very nearly horizontal at CET of about 10˚C. The preponderance of red diamonds near the top shows the influence of Australian greenhouse gas emissions at its peak in the autumn when CO2 and other greenhouse gases are holding heat from the summer sun to the greatest extent.

It might be thought potentially possible in this transitional month that the red diamonds (largely controlled by man-made global warming) would follow a different pattern from the white diamonds largely controlled by natural climatic variability. This does not really seem to be the case on first glance, and even on a brief statistical examination I did not find anything to suggest that there had been a major change since 1974 in either Spearman’s ρ or Pearson’s r. 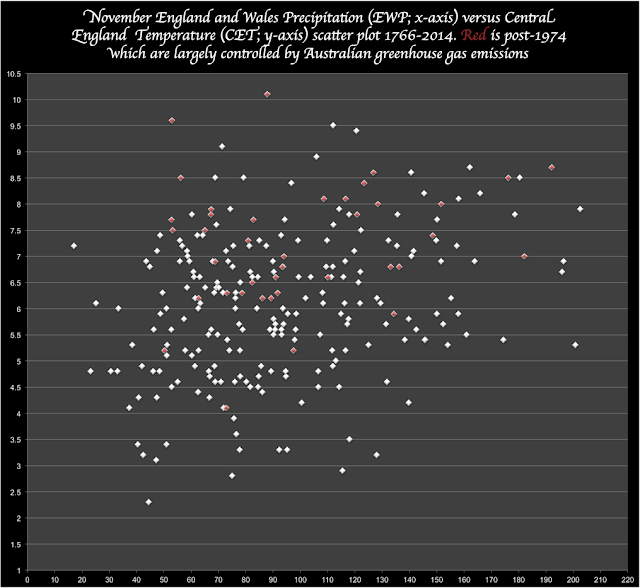 Here we see that the relationship between EWP and CET has completely reversed from July, August and September. The line of best fit clearly has a positive gradient indicating that warmer Novembers tend to be wetter rather than drier. The record warm Novembers of 1994 (CET 10.1˚C; CEMaxT 12.5˚C) and 2011 (9.6˚C) may not be “warm-dry” outliers since they are so influenced by artificial greenhouse emissions. The record dry November 1945 is definitely a “warm-dry” outlier, although only marginally hotter than the anthropogenically-controlled 1981 to 2010 average:

A striking feature is that the “cold-wet” outlier November 1910 was very sunny – possibly the sunniest of the century over the UK with 93 hours over Durham – yet the “warm-dry” outlier 1945 was distinctly dull with only 42 hours of sunshine over England and Wales (virgin mean around 60 hours). This apparent contradiction is not actually even rare, as we will see when discussing December. 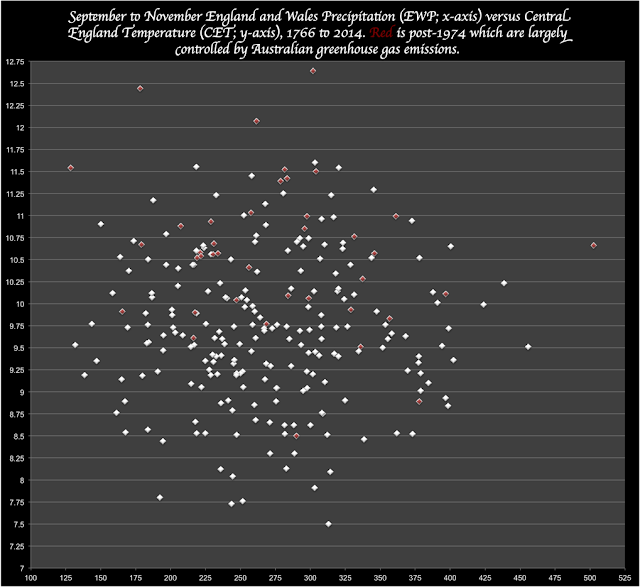 The autumn graph shows few startling features, apart from the extreme preponderance of red diamonds near the top of the graph, as it is in this season where the influence of Australian mineral and road pollution is most apparent. 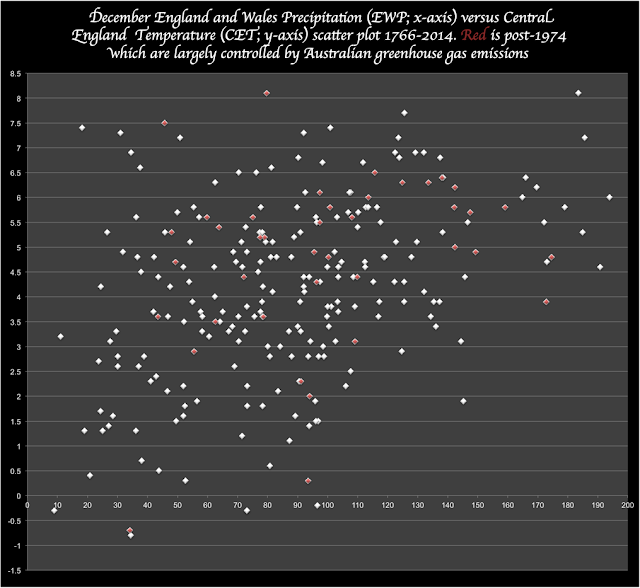 We can see here for December that the positive slope of the line of best fit is more intense than for November, although there are a number of outliers which I will discuss in some detail.

The “warm-dry” outliers are:
It’s notable that, despite being warm and dry which would suggest clear skies and un-wintry conditions, December 1971 was in fact very gloomy with a mere 29.9 hours sunshine over England and Wales, whilst December 1953 was only marginally less gloomy at 32.1 hours sunshine and December 1988 had only 38.4 hours. The median sunshine for England and Wales from 1929 to 1996 was 42.2 hours. The reason for this apparent contradiction of mild, dry months being even gloomier than usual for the UK is “anticyclonic gloom”, whereby persistent anticyclonic control and still conditions – which can be either cold or warm depending on where the airmass originated – lead to dry weather with persistent fog that the weak sun in the UK winter has no hope of lifting. In the past, though not today, anticyclonic gloom could occur in southern Australia, notably in May 1932 which had only 81.1 hours sunshine over Melbourne (average about 134 hours) despite being Victoria’s second-driest May since 1885.

The “cold-wet outliers” are:
It’s amazing, though understandable when one realises how much anticyclonic gloom is the limiting factor on UK sunshine, that the very snowy December 1886 had, according to all available data, much more sunshine over the UK than any December since: 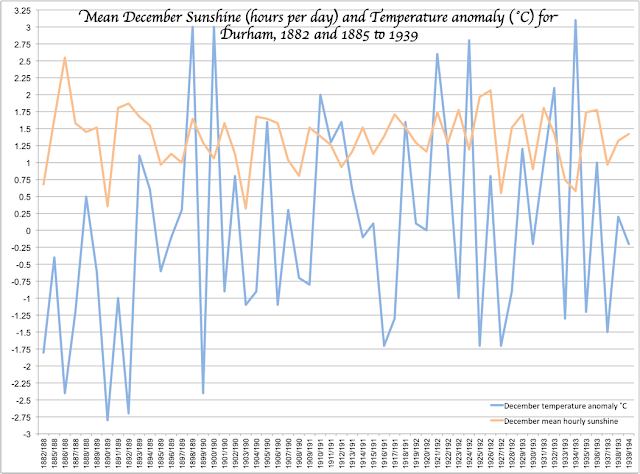 As can be seen, December 1886 was far sunnier than any other December over Durham, with half an hour per day more than the next sunniest (1926). Since December 1886 was a distinctly cold month (CET 1.9˚C; Scotland estimated 0.3˚C; Northern Ireland estimated 2.0˚C) and Durham is on an easterly slope, one would expect with easterly winds an even greater sunshine excess on western slopes, so it seem probable to me than December 1886 would have had over 80 hours UK sunshine, which is more than any November or January since 1881. Figures in the less gloomy southwest would have been logically even higher, and possibly higher than 90 hours with some totals (unrecorded) over 100 – in a month with the lowest pressure recorded in the UK and some of the heaviest snowfall.

The reason such a cold, snowy month was at the same time so abnormally sunny is actually relatively easy to understand: that the disturbed nature of the atmosphere eliminated anticyclonic gloom and allowed the sky to complete clear even during short fine spells. This is quite unlike December 1953 or 1971 or 1988, where stable air and lack of wind meant low cloud never dissipated.

Even December 1981 was no gloomier than the average, whilst very limited reports on 1874 are uncertain. However, the snow-drenched but bright December 1886 is no isolated case: November 1910 (noted above) and January 1959 (second part) were similarly snowy yet exceptionally sunny, and many other cold months were also much sunnier than usual.