Monthly and seasonal EWP versus CET graphs: January to June plus fiscal year 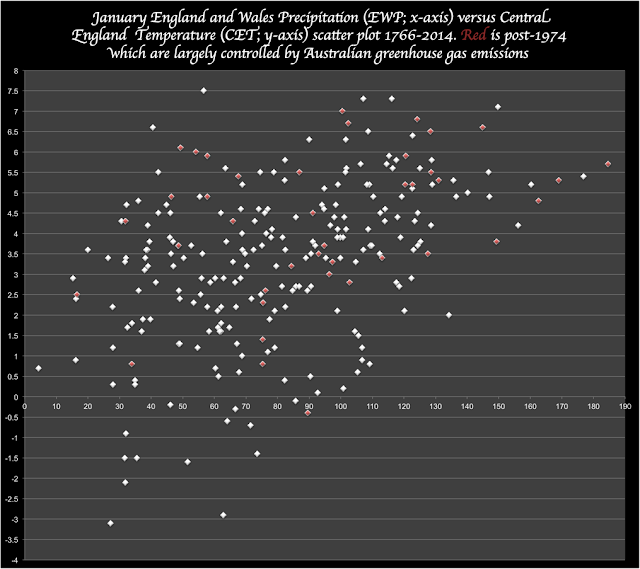 As can be seen, a general positive correlation between EWP and CET is evident in January, as in December and November. Outliers from the general pattern of warm, wet Januaries with maritime flow contrasting with cold, dry ones characterised by easterly winds from the continent do occur, but are less distinctive than those for December.

If not to nearly the same extent as December 1886, Januaries 1895 and 1979 were both sunnier than average except in eastern coastal areas. In the southwest Torquay exceeded ninety hours in both months, and was only ten hours shy of the UK record for January in 1979. January 1942, however, was rather gloomy, with only 37 hours sunshine in England and Wales against a virgin mean of 47.7 hours – although 11 Januaries since 1929 have been gloomier. January 1959, however, resembles December 1886 very closely in setting sunshine records, and data from Durham and reports from elsewhere suggest January 1959 is very likely the sunniest since before 1881.

The “warm-dry” outliers of 1898 and 1916 are distinctly different. 1916 was the mildest January on record (though in between a very cold November and snowy, dull March) but was probably the UK’s windiest month since 1871 with gales on 25 days – some destructive even when no rain fell. 1898 was a classic anticyclonic gloom month with little sunshine, but the red diamonds in the upper left (1989, 2005) were ten to fifteen hours sunnier than the mean, and the “winterless winter” of 1948/1949 was extremely sunny. February shows the familiar pattern from the other winter months of warm, wet, westerly “maritime” months contrasting with cold, dry, easterly “continental” months. Outliers to this pattern are concentrated exclusively in the top left “warm-dry” section of the scatter plot:
The lack of “cold-wet” outliers like January 1809 or December 1886 is highly notable. It is true that February 1900 (CET 2.6˚C; EWP 131 millimetres) was much colder in Scotland than in England, but February 1900 was 2.0˚C warmer than January 1809 at both Edinburgh and Gordon Castle, and not as cold in southern Britain.

Moreover, as can be seen from this precipitation map for the record cold February 1947, these “cold-wet” outliers are only so in the east. Often these supposed outliers are very dry on western slopes which, normally exposed to the westerly winds, are left in a rain shadow (more accurately a snow shadow) that is much stronger than the normal westerly rain shadow on the eastern slopes of temperate zone mountains. The then-record cold “Crimean Winter” February of 1855 was the driest – indeed the driest for any month – between 1845 and 1894 at notoriously wet Seathwaite in the Lakes District, with less than half an inch of water-equivalent precipitation or less than a third the average water equivalent precipitation for all of England and Wales. 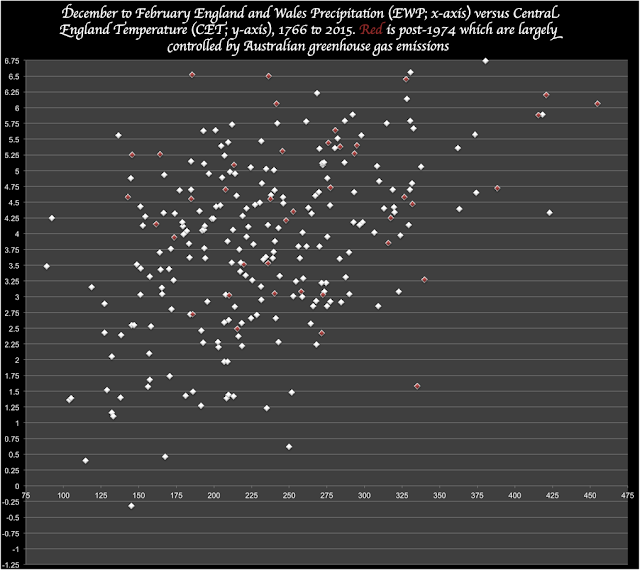 As can be seen, the winter graph shows a positive correlation between EWP and CET already explained for the individual months and not significantly altered by greenhouse pollution from Australian road transport and coal power. In complete contrast to the February plot, the most notable outliers are of the “cold-wet” type, most notably:
“Warm-dry” outliers are not so pronounced, and include 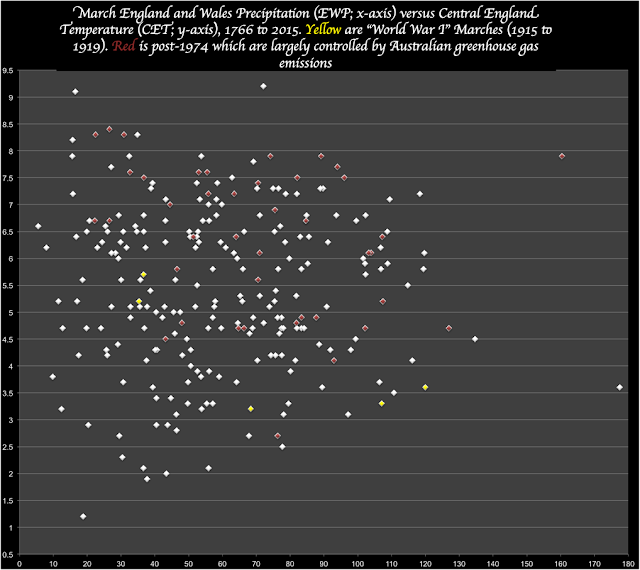 With March, I have noted with yellow diamonds the several very snowy Marches that occurred around a century ago during World War I. These were particularly disruptive in the emergency with cold delaying opening of the growing season in 1917, and causing human disruption during the snowy March 1916 – apart from 1947 the worst March of the twentieth century. That March 1916 and 1919 were exceptionally cold and wet is very clear from this graph.

It is extremely evident that the positive correlation seen for the previous four months has completely disappeared, and that the line looks exceptionally flat, with “outliers” being either warm (1938 and 1957), cold (1785) or wet (1947 and 1981).

It’s possible that the true shape of this curve is a triangle – one sees much more CET ranges in dry Marches (both March 1785 and March 1938 had EWP of under 20 millimetres and March-April EWP under 30 millimetres) – than in most wet Marches, though the two EWP outliers in 1947 and 1981 make claims of a “triangular”-shaped scatter plot look dubious and we can assume that in March EWP and CET show little correlation. 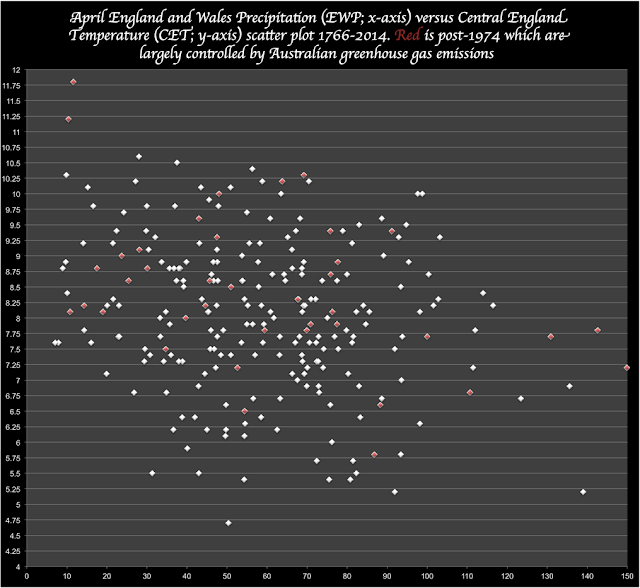 As we can see, for April the EWP versus CET relationship is again negative – as it was from July to September. The line of best fit is less steep than for July and August, but nonetheless not flat like for March.

There exit numerous red diamonds in outlying parts of this graph – both hot and wet. Nevertheless, because the extreme hot outliers of 2007 and 2011 were both exceedingly dry, it is not likely that man-made global warming had altered the shape of the graph at all. 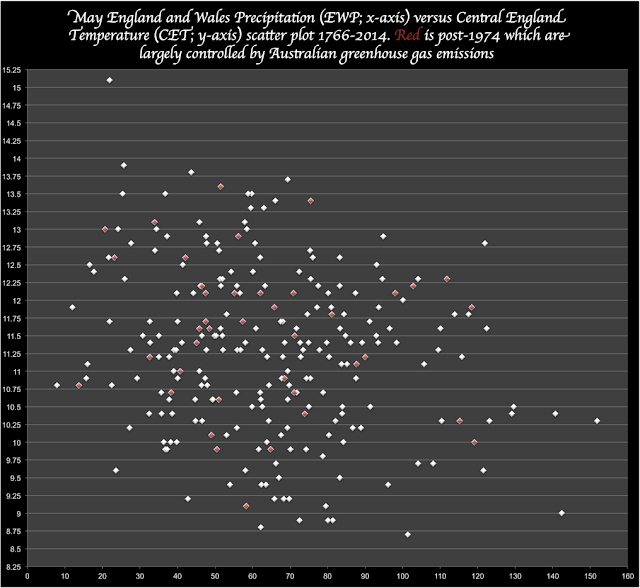 In May we see a clear negative correlation between EWP and CET, as observed in the summer months in our first set of scatter plots. The most striking outlier is the “hot-wet”, non-anthropogenic May 1811 with CET of 12.8˚C but a very wet EWP of 121.9 millimetres – the eighth-wettest on record and one of only four cases where May was the wettest month of the calendar year (the others being 1773, 1820 and 1983). The striking character of 1811 – a cool summer, two cold winters but very hot spring and autumn – is noted in Kirkpatrick Sale’s Rebels Against the Future: The Luddites and Their War on the Industrial Revolution – Lessons for the Computer Age.

The prime “cool-dry” outlier of 1876 (EWP 23.6 millimetres; CET 9.6˚C) featured two very cold days at the beginning but was the beginning of the summer when W.G. Grace hit the first two first-class triple centuries. From the context of a warming world, May 1991 – the third-driest on record but with CET 0.4˚C below the virgin mean of approximately 11.2˚C – is also notable although it was obviously a similar but more eastward Atlantic block to September 1986 which I discussed before. 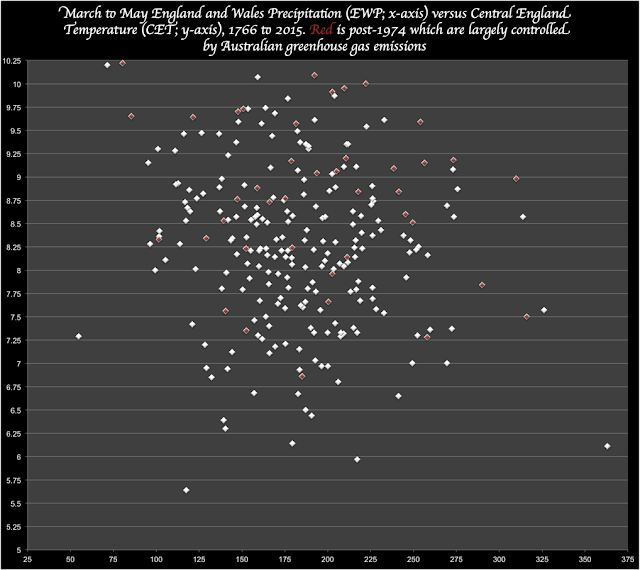 As we would expect, in the spring season over the UK, hotter seasons tend to be drier. It’s notable that here one sees the shift brought about by Australian greenhouse gas emissions much more as the diamonds on the upper right (hot and wet) are almost all red.

In contrast to the numerous moderate “warm-wet” ouliers brought about by man-made global warming, there are two exceedingly marked “cold-dry” outliers from before 1974: the record-cold spring of 1837, which was 0.92˚C colder than the winter of 1833/1834, and the record-dry spring of 1785, the core of easily the driest fiscal year since 1750. 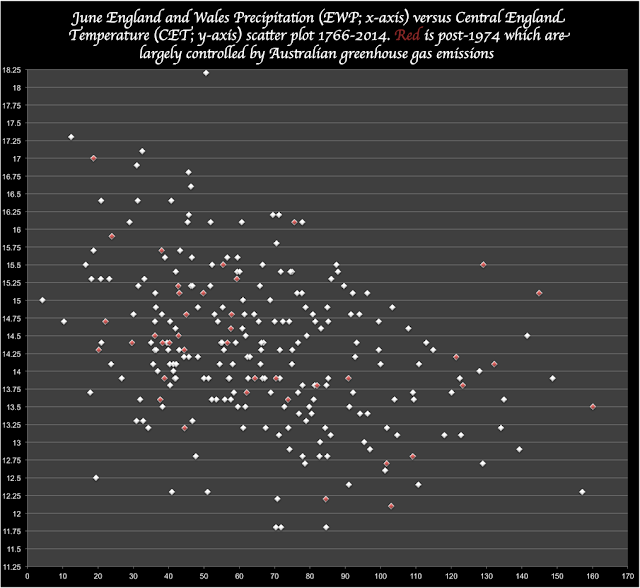 For June, the slope of the EWP versus CET graph is strongly negative, as for all the summer months. Despite two major “hot-wet” outliers since 1974 in 1982 and 2007, there is not the concentration of red diamonds in the upper right that we saw for the spring season. The major “cool-dry” outlier is the foggy, obviously northerly and blocked June 1923, which was very cool over Europe and uniquely wet in Australia, where the Mallee received up to five times its normal rainfall. June 1923 clearly had a large Arctic block causing hot weather in Canada as well as the cool in Europe:

It’s notable that in both May 1991 and June 1923 Scotland was less cool than southern England, no doubt because it was nearer the centre of the block and less exposed to Arctic airflows. 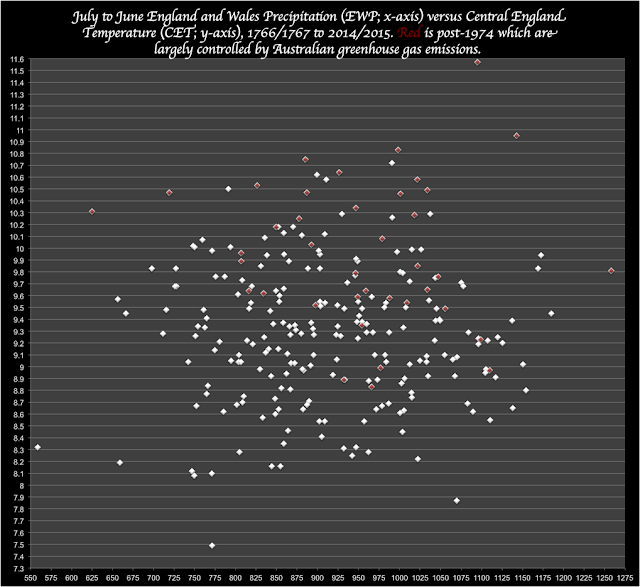 Although I have not yet calculated the Spearman and Pearson correlation coefficients, the full fiscal year EWP versus CET scatter plot suggest that the positive correlations between November and February outweigh the negative correlations we observe from April to September.

It is possible, though I have not checked, that the choice of the fiscal year over other possible twelve-month ranges affects the result by dividing over two years extreme hot and dry summers like 1826, 1868, 1911, 1921 and 1976. Such dry years as 1826 and 1921 were in fact hot as a whole, despite the association of dryness with cold during the winter, the quintessential “continental” year of 1780 was only 0.11˚ cooler than the 1766 to 1974 average despite an extremely cold January, and 1947 with its long, hot summer was 0.61˚C hotter despite its record cold February.