Are climatologists overestimating the “Asian Haze”? 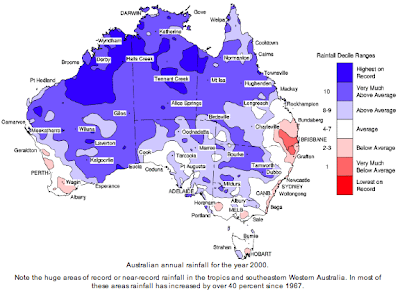 Ever since the record-breaking rainfalls of 2000, the continual increases in rainfall over northwestern and central-western Australia have been a major concern to me because I have always taken them as evidence of anthropogenic global warming. In fact, I have tended to view greenhouse models that do not take these increases into account as inherently defective.

When I was first trying to persuade the CSIRO and Bureau of Meteorology of the possibility these large increases (up to forty percent since 1967 in an area bounded by Kalgoorlie, Eucla and Wiluna) prove humans have taken control of the climate, I was extremely angry that I was ignored. I indeed still feel their ignorance comes from loyalties to car and fossil fuel corporations, and that if they were serious about global warming the CSIRO and Bureau of Meteorology would be lobbying intensely for a total ban on road building and transferring every cent of road spending and air transport subsidies to railways.

Once when I was in Coles shopping with my mother and brother, I read an article about the drying of Australia from global warming that stated that whilst the north had become wetter, the increased rain was caused by Asian aerosols and would more than reverse when they were cleared. I was as always extremely angry about a continent whose ecology should oblige it to be the absolute world leader in reducing greenhouse emissions having the highest per capita emissions in the world, but it was impossible for me to believe Asian aerosols were causing such large rainfall increases, so that I still thought CSIRO and BOM altered their global warming models to avoid controversy from these increases – which in any case never got into the capital city media.

In recent times, northwestern Australia’s rainfall increases have gained some publicity, probably through Senator Bill Heffernan suggesting Australia should try to develop the north for agriculture, even though its soils have proven a totally intractable barrier for not only European farmers, but also the Austronesian ones who colonised the Pacific.

The theory is that the “Asian Haze” increases northwestern Australian rainfall though cooling the northern hemisphere relative to the southern, so that convergence and rain formation is enhanced and shifted southward. Recently, it has been suggested that the “Asian Haze” has been also shifting the southern mid-latitude storms southward, and the CSIRO is trying to link declines in rainfall over southwestern Australia with similar declines over northern China. It is simply impossible for me to think the “common cause” Dr. Wendy Pyper is seeking could be anything other than the “Asian Haze”. Given the power of greenhouse emitters in Australian politics I imagine people like Hugh Morgan and Robin Underwood (and most ordinary young outer-suburban families) want to and do believe southwestern Australian rainfall will when the “Asian Haze” is cleared return to levels typical of the wet eras from 1915 to 1923 and 1945 to 1947.

Yet, aerosol forcing does not agree with the observed changes in central-western Australian rainfall and it seems unlikely they replicate those in the northwest. 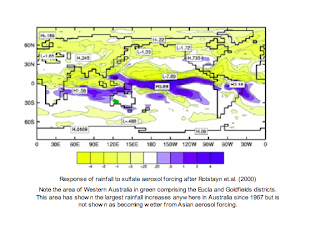 There is also no evidence of declines in southern Australian rainfall from sulphate aerosols alone (though black carbon aerosols are much more likely to alter synoptic circulation because they actually cause transfer of heat).

Also, a recent study of northwestern Australian rainfall wisely questions the most commonly accepted influence of the “Asian Haze”, though it still does not look at central-western Australia or possible errors in past greenhouse models. It does, however, look at the likelihood that the wetter northwest and central-west observed since 1967 is indeed a permanent change, even if soil infertility means even massively increased rainfall is of no practical value. Another revelation from page 232 of the 1998 book Climates of the Southern Continents: Present, Past and Future is that several little-known scientific studies from as long ago as the late 1980s seem to show that during the warmest periods of the Holocene southwestern Australian rainfall was distinctly lower than between 1885 and 1967. This would further confirm the changes since 1967 result from enhanced greenhouse gases. Also, my RMIT minder told me last year that the areas of central-western Australia where rainfall increases have been largest have been continuously arid for hundred of thousands of years. This would indeed suggest that, as carbon dioxide levels now are the highest for a similar period, that central-western Australian rainfall is exceptionally sensitive to carbon dioxide levels and that with rises to 700ppmv widely predicted by the end of the century rainfall patterns over Australia will indeed undergo the type of change I described in The Age during 2006 and 2007.
on Sunday, April 13, 2008

Excellent blog Mr Benney. I agree re. the need for new rail spending (see my various posts on the topic at melbpt.wordpress.com), but there's also a broader issue with stationary generators and consumption (especially meat and consumer goods).

Getting workable carbon trading is the best way to get into this. What's your opinion - set price or quantity?