How to do an about-face on a critical issue

If my experience with my RMIT minder is accurate, greenhouse sceptics will do an about-face when trying to deal with the theories of the "Asian Haze" having increased rainfall over tropical Australia – in spite of the fact that larger increases in the Eucla and Goldfields cannot be explained by the haze and are almost certainly, in the words of CSIRO scientist Ian Smith, “a signature of global warming”. 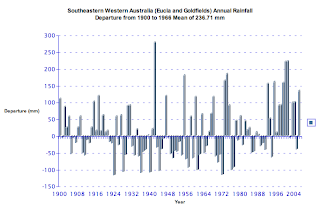 When I first mentioned the theory of the “Asian Haze”, my minder said that it was far more reasonable an explanation for the rainfall increases in northwestern and central-western Australia and the catastrophic rainfall declines that have occurred at the same time over southern and southwestern Australia than anthropogenic emissions of carbon dioxide and other greenhouse gases.

On Tuesday, however, he said that the “Asian Haze” is nothing more than an effort to "shore up holes in the crumbling theory of global warming". Like many Americans who talk of a "Church of Global Warming" and often refer to Al Gore as “Pope Goreus” (ludicrously they call him both “Pope Goreus the IV” and “Pope Goreus the VI”) my minder believes that global cooling is imminent, which would one imagines mean southern Australia regaining its former winter rainfall. However, nobody in the CSIRO or BOM dares to believe this even with probable pressure to do so from car and fossil fuel corporations. Again akin to American sceptics, my minder actually says car and fossil fuel corporations have too much faith in anthropogenic global warming.

Realistically, the investment the CSIRO and BOM have quite probably invested too much money on studying the “Asian Haze” and should have tried to fine-tune their global warming models to explain why the changes have been so large. Had they done that, we might already know a great deal that is still unknown and be able to forecast with greater accuracy future climate changes.
on Saturday, April 19, 2008