Ten books that "screwed up the world" 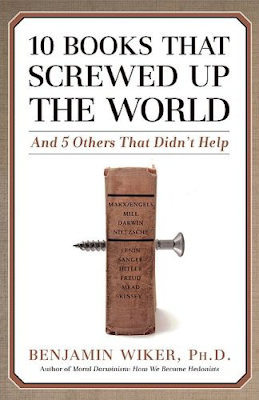 Regnery, the publisher of the interesting but often very untrue Politically Incorrect Guide series have published now Ten Books that Screwed Up The World (and Five Others that Didn’t Help). It will be for sale in May this year.

The cover is actually far from bad, though one reason I oddly don't detest the screw is that the book seems to resemble an old Wisden like I used to read in the State Library of Victoria. I still adore my old Wisdens and old county cricket is my longest-standing hobby, having been started in a holiday at Merimbula back in 1991, when I read about 1906 county cricket in all my spare time and was really fascinated because it seemed different from the more modern cricket I had read about before.

The list is basically, as one would expect, very similar to the lists of Human Events and to a lesser extent the Intercollegiate Studies Institute that have attracted my attention despite - or perhaps because of - the attacks my mother and brother make upon them.

The “ten books that screwed up the world”, listed in order of publication rather than effect (though the author yet again says The Communist Manifesto must absolutely be the worst offender of the lot), are:

- The Communist Manifesto: easily #1 on Human event's list; ineligible for ISI list.
- Utilitarianism by John Stuart Mill. Mill is an author who (like Ayn Rand) gets very mixed receptions from the Right, almost certainly because both were extremely pro-free-market but also equally anti-religion. On Liberty was voted as an “honourable mention” in Human Events list, but all his books are again ineligible for the ISI list.
- The Descent of Man by Charles Darwin. Gained two votes on the Human Events list. Included according to Benjamin Wiker for its “eugenic” implications and its influence upon Hitler and Sanger.
- Beyond Good and Evil by Friedrich Nietzsche. Ranked #9 by Human Events. Essentially an expected choice.
- State and Revolution by Vladmir Illich Lenin. Not on Human Events list, but one commentator I read a comparatively long time ago said it should have been there instead of What Is To Be Done.
- The Pivot of Civilisation by Margaret Sanger. One of the people most hated by the Right, George Grant's biography Killer Angel is perhaps the rantiest book I have ever read. I tried half-heartedly to read both Pivot and her previous book, 1920’s Woman and the New Race, which the Intercollegiate Studies Institute listed as one if its worst books. Neither seemed half as aggressive as Grant's biography of Sanger, but given her reputation I still wonder how at least thirteen of the fifteen Human Events judges overlooked Sanger entirely.

(Here I will note that Human Events’ rules for “Top Tens” exclude The Pivot of Civilisation and Woman and the New Race from being “Honourable Mentions” if only one judge voted for them, even if that solitary judge put them at #1 of their ten. From my experience with other lists of books or music, such an occurrence is not improbable, even if the book with which that occurred would not necessarily have been by Sanger.)

- Mein Kampf by Adolf Hitler. This one needs no discussion, really, except to say that some on the Left think its inclusion does not fit with what the Right think. In fact, Hitler attacked the Right’s heroes, like Ludwig von Mises, every bit as violently as any Stalinist regime, and they condemn the “state-directed” ideal of fascism every bit as much as state- or worker-controlled socialism. Ineligible for the ISI list (and its ineligibility has been the focus of many a misunderstanding), but ranked #2 by Human Events.
- The Future of an Illusion by Sigmund Freud. If it is as Wiker describes it, it is simplistic at best, given the clearly valuable and beneficial cultural and community-binding role of religion in traditional societies and in suburban/exurban Australia and Red America today. I have never read Freud, but have refrained from noting how the Right condemns him to my relatives. Looking inside the book, it aims to link Freud to the Right's older villains in a way I have never read of before.
- Coming of Age in Samoa by Margaret Mead. This one needs little explanation: it was after all #1 on the ISI’s list, and Derek Freeman's criticisms in Margaret Mead and Samoa (which I have read) seem reasonable.
- Sexual Behaviour in the Human Male by Alfred Kinsey. Perhaps the most hated book among conservatives, I actually tried very hard to read both this and Sexual Behaviour in the Human Female but no matter how hard I read it was very difficult to tell whether the truth is that Kinsey was truly scientific or Judith Reisman’s claims in Kinsey, Sex and Fraud that he was deliberately distorting evidence and his samples were actually completely unrepresentative. Reading others on both Left and Right makes me doubt Kinsey's originality and makes me think others could question it far more than they do. The Havelock Ellis book Psychology of Sex (listed by the ISI) seems, given the difference today between Europe on one hand and Australia/Red America on the other, to be the tip of the iceberg in this quest.

In addition, Wiker adds Five Others that Didn’t Help:
Whilst there is little surprising, the omission of Democracy and Education, The Population Bomb and The General Theory of Employment, Interest and Money was perhaps unexpected. All these are very prominent in the Right’s lists of “worst books”. One could also add Silent Spring and The Authoritarian Personality to such a list.
on Sunday, April 27, 2008

This book is truly appalling and is indicative of the cultural and intellectual bankruptcy and sheer DISHONESTY of the ideological hacks on the "right" of the USA culture wars.

And also indicative of the inherent totalitarianism of those on the christian "right" with their only one way of looking at things---the politics of binary exclusions and its inevitable scapegoating.

One of their favourite and influential books is TOTAL TRUTH.
The title quite directly tells us that these people possess the "total truth", and by golly they are going to use whatever means they can to impose their inherently totalitarian agenda on to every one else. Just like their Islamic counterparts.

The origins & consequences of the current global crisis are far more complex than this simplistic DRIVEL could even begin to comprehend. As are the possible solutions---if there are any solutions!

I would say that a necessary part of the solution is to throw our entire "christian" heritage away with both hands!

I will follow with the completely non-academic querry. Have any of you noticed that the author resembles a vice officer? Exchange the glasses with dark glasses, take away the beard, but leave the mustache, and simply remove the tie. Then notice the masked sense of superiority.

Notice, too, that his answer to legitimate critique is always, that the point is too complicated to discuss in the few minutes allowed.

Re "Have any of you noticed that the author resembles a vice officer?" I cannot agree. On the video where he described the book and explains, a half-sister whom I am visiting said Wiker looked very pleasant and even attractive.

Is it my imagination or is Regnery Publishers the Bookpublisher of the Catholic far right, perhaps the Opus Dei Society? The various books rejected by this author seem to legitimate contraception, celebrate individualism (a distinctly protestant value; just ask Max Weber), Marxism and Empire (most of them challenged Church Hegemony), believe that knowledge is more subjective than objective, posit human evolution from primates and explore human sexuality. I seem to remember another Regnery book with a distinctly Catholic Right tendency; I believe it was called The Myth of Hitler's Pope and it defended the role of the much maligned Catholic Church during WWII.

Regnery seems to have a religious and political orientation. I'm a leftist so I only peek in once in a while.

Yellow, it is true that Regnery has a distinctly Catholic orientation. Most of its writers are devout Catholics, though there are exceptions.

Nonetheless, Regnery is in no way affiliated with Opus Dei and is in fact entirely independent of the Catholic hierarchy. Wiker, however, has written for publishers which are linked with the Church.

Of your claims about the various books criticised by Wiker, I can agree with all except:
- celebrate individualism and
- believe that knowledge is more subjective than objective

One of the worst books, though not on the list, was Adam Smith's "Wealth of Nations".

for the people who write and read books like Ten Books the Screwed Up The World, Adam Smith is a critical influence.

These people believe in a minarchy with no public sector apart from perhaps defence and police. They believe the free, unhampered market will provide for welfare and improve living standards for the poorest much more than government possibly can.