The US election is one thing I have decided it best not to write on - especially as I am in no way somebody to believe that voting can change much - but recently I have felt I should really point out what is shown by the United States election, namely:

That Australia, rather than being a central part of modern Western culture, is either:

1) if you are a liberal, a relict of the past age of imperialist, colonialist attitudes
2) if you are a conservative, the one and only stronghold of the traditional values of Western civilisation

The fact that Australia is the stronghold of Western civilisation probably became apparent to me when reading about what politically correct professors teach in American universities. It really rather startles me to know that an apparently quite conservative American would send his daughter to a university with 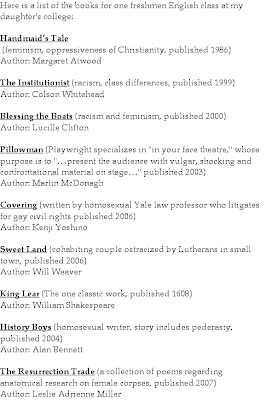 such a curriculum and feel he has no superior alternative.

I was a student in 1992 and 1993, so an equivalent curriculum would study only literature published since 1970! The works I did study included

- Oedipus Rex
- Romeo and Juliet
- A Streetcar Named Desire
- How Many Miles to Babylon? (the only book actually written after 1970, but actually set during World War I)
- Hard Times
- A Man for All Seasons (a period piece about the sixteenth century published in 1960)
- Summer of the Seventeenth Doll (the only Australian piece, but if Diana West is right, more relevant overseas)
- Death of a Salesman
- Twelve Angry Men

If these lists are a representative selection, then Australia is indeed a society unlike any other in the OECD, with values completely abandoned elsewhere. Its values of relatively free development, free private car use, scepticism about global warming (in spite of overwhelming evidence something should have been done a long time ago), opposition to greenhouse targets and scepticism of government solutions to economic problems are quite unlike those of Europe, New Zealand, Canada, and now it seems the US as well.

The complete absence of movements for things like homosexual marriage and racial quotas proves further that Australians view human nature very differently from the rest of the developed world - and most likely even the urban populace of developing nations too.
on Thursday, December 11, 2008