Around seven years ago, passengers on the route 250/251/253 bus felt anger toward me because I constantly accosted them with the question of what temperature they liked the weather to be.

Although back then I already knew that accosting people was socially unacceptable, my enthusiasm for the question utterly overrode any scruples. The reason is that every summer GOLD FM bombarded me with advertisements saying “all around the temperature is rising”/“meet you down the beach cause were gonna have a good time” when I was sweating because of the heat and glary sun which I wanted to escape from via nothing except cooler weather. Even days of 25 degrees could be uncomfortable, and when it was thirty or more I hated it. The consequence was that I could not believe that most people really enjoyed horribly hot weather and thus I was extremely eager to ask people “what temperature do you like the weather to be?”

Having accosted many people on buses and asked them that question, I found that the popular temperature for most Australians was from 24 to 28 degrees, being a little higher for women than men. I find such temperatures still very warm to hot and prefer something from 15 to 17 degrees ideal, with a little cloud to keep off the glare being wonderful. As I see it, the best weather in Australia is 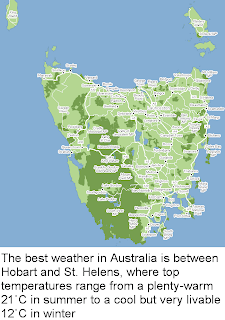 on the coast of Tasmania from Hobart to Eddystone Point.

After a few messages in the Green Guide that pointed out not everybody likes the weather to be thirty-three degrees (I say “halve that and you’d have it perfect”) GOLD FM toned their advertising down until this spring. Their ads saying “water restrictions are here to stay” and saying the government is securing Victoria’s water supply are pure lies. If the government were securing Victoria’s water supply, it would take the following steps:

2) Phase out all coal-fired power stations

3) Shift all smelting of aluminium to nations with reliable hydroelectric power – most likely New Zealand.

6) Invest in public transit to ensure one-to-two minute services to every suburb 24 hours a day. This would cost as little as the total wastage on CityLink and ensure that no Melburnian would be disadvantaged by a complete ban on private vehicle registration.

7) Make sure that every cent of land transport investment must be on rail as it is more energy-efficient than road or air.

Such a "seven-point plan" has been outlined in Environment, Capitalism and Socialism for over twenty years and it is time everybody inside and outside Australia sees its necessity.

The problem that the DSP can’t comprehend is that politically most of Australia outside academia is – by overseas standards – nothing except far-right and will never consider socialism as it would hurt the personal relationships they value in a way exceedingly rare for urban peoples.
on Thursday, December 25, 2008